Yehuda Sharim is the Aubrey ’42 and Sylvia Farb Postdoctoral Fellow in Jewish Studies and a scholar at the Kinder Institute for Urban Research at Rice.
TeachingAlumniFeatures

A Voice for Houston’s Refugees

A Voice for Houston’s Refugees

A NEW PROJECT THAT DOCUMENTS THE LIVES AND EXPERIENCES OF HOUSTON’S IMMIGRANT COMMUNITIES JOINS AN ESTABLISHED, STUDENT-FOUNDED NONPROFIT TO RAMP UP RICE’S OUTREACH TO THIS BURGEONING POPULATION.

Yehuda Sharim is the Aubrey ’42 and Sylvia Farb Postdoctoral Fellow in Jewish Studies and a scholar at the Kinder Institute for Urban Research at Rice. A native of Israel whose parents immigrated there from Iran, Sharim’s research chronicles the creation of Sephardic-Mizrahi identity. In addition to his teaching duties, Sharim is leading a project that documents the lives and experiences of Houston’s growing refugee and migrant communities.

The multipronged project, dubbed “Houston in Motion: Empowering Houston Migrant and Refugee Communities,” will bring together video footage, oral histories, educational events, research, technology and survey data to document and engage with Houston’s diverse refugee and migrant communities. The project has received funding from the Rice University Center for Civic Leadership’s Hilda and Hershel Rich Endowment for Student Community Service as well as the Kinder Institute.
Elizabeth Long, a Rice professor emerita of sociology, and Yan Digilov ’11, a strategist for the Firestarter Group, a nonprofit social impact investment firm, are also leading the project. Sharim spoke with editors at Rice Magazine and the Kinder Institute about his work. This interview has been edited and condensed for clarity.

How did you become interested in working with refugees?

It’s always been the focus of my work. I’m from a family of refugee immigrants. It was a different experience than refugees face in Houston in 2016, but I’m aware of the struggles that are acts of migration. It’s about reinventing oneself in a new place, reinventing home when you don’t know what home is.

When I came to Houston, I began contacting refugee resettlement organizations and met Yan Digilov, of the Firestarter Group, who is a Rice alum and a Russian immigrant. Our project is working with communities to humanize and give a face to the experiences most of us don’t know about. Harris County receives more refugees than any other county in a state that received more refugees than any other in the country last year. Houston is the world right now.

What are the biggest refugee communities in Houston, and what do you know about how they arrived here?

They are Afghan, Cuban, Burmese, Somali, Congolese, Iraqi, Mexican, Guatemalan, Salvadoran, Nicaraguan, Syrian, Iranian and Bhutanese. It’s a big mix. Last fiscal year, the U.S. admitted 68,000 refugees. In the early 1980s and 1990s, it was 200,000. Refugees on average spend eight years in a refugee camp. Some spend 20 years. You’re born there, you come here, and you can be in total shock.

What support do refugees get when they arrive in Houston?

There are five resettlement agencies here, and they’re doing an incredible job. Most of the people who work there have been refugees themselves. They’ll pick them up from the airport, help them with their phone and bank accounts, enroll their kids in schools. Thirty years ago, these agencies had funds to aid resettlement for two years, but now, they can only help refugees for three to six months, so there is a big gap. Nonprofit organizations and religious institutions also play a huge role in resettlement.

Tell me about a particular individual who’s made an especially meaningful impression on you.

One Congolese refugee I met, Riziki Muloba, spent 20 years in a refugee camp. In the days of the civil war, you’d run back and forth to the forest for refuge. You go to Kenya, then to another camp in Ethiopia or elsewhere. You don’t know where your dad or some of your siblings are. It’s just you and your mother and younger sisters. Ten years down the road, you find yourself in Houston, in your mid-20s and with no education. He was fascinated at the idea of making films and started working with our film crew.

Can you tell us more about the Burmese population?

The Burmese are one of the largest and most diverse groups that come here. They spend on average 15 to 20 years or more in the refugee camps in Thailand or Malaysia. I’ve encountered families of 11 that lost seven of their kids in the refugee camps. I want to help those communities and empower their leadership to make things possible for them rather than see them wind up being estranged or exploited.

How will Rice students be involved?

That’s a big part of the project. We want students to be involved both in and out of the classroom. Right now, we have nine students working in an internship capacity. They interview various subjects, collect and analyze data, edit film, organize events and manage our website. One of my former students, Marica Sharashenidze ’16, had an interest in podcasts and is developing these for us. Also, I’m teaching an undergraduate course this spring, Art and Activism: Critical Study of Hope in Times of Crisis, in which Houston communities will serve as a case study.

VIEW A TRAILER
of the “Houston in Motion” documentary-in-progress.

Other than the documentary film, what other goals do you have for this project?

We want to know about the refugees’ short- and long-term experiences. What happens to these people three or five years down the road? Are they staying in Houston or moving someplace else? What are the outcomes? Are they employed? We are developing surveys and maps that can help gather and communicate such information.

We’re also working on an app that connects refugees to resources like transportation, mental health and education, which we’d offer in multiple languages. There are local ethnic communities that are growing, and they want to support one another.

How has Houston reacted to the rhetoric around Syrian refugees?

Some NGOs are getting more support because of it. Mosques are becoming aware of the need to support refugees and come together. This kind of rhetoric influences migrants and refugees who themselves are Muslims. They feel they need to defend themselves. They’re more cautious.

The story of Muslim immigrants is complicated. Some of them, like some recent arrivals from Afghanistan and Iraq, worked with the American forces. They made sacrifices — I’ve met some who are severely disabled — and now they feel betrayed because they’ve been lumped together with terrorists. It’s intense to live with this kind of rhetoric, when you feel you’re being targeted.

What do you hope will be the outcome of this project?

That people will think of refugees and immigrants as “we” and not “they.” We want to assist in and improve refugee arrival and resettlement, especially through our data visualization, multimedia projects, reports and Web resources. By telling these stories and gathering this data, we hope that the community will be encouraged to respond to refugees’ immediate needs. 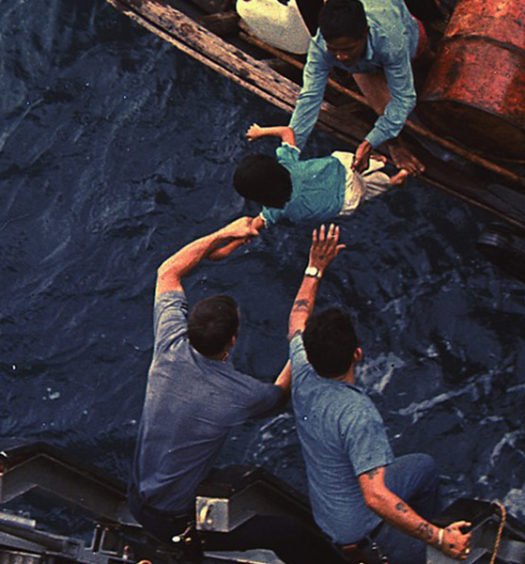