100 Years of the Thresher

100 Years of the Thresher

A VOICE FOR STUDENTS: The Rice Thresher did more than document a constantly growing campus, comment on student social mores, wade into institutional conflicts and analyze athletic rivalries. It also provided a lens on how Rice students viewed, reacted to and participated in some of the past century’s major events. We’ve drawn from a few of them — and added a little campus color, too. 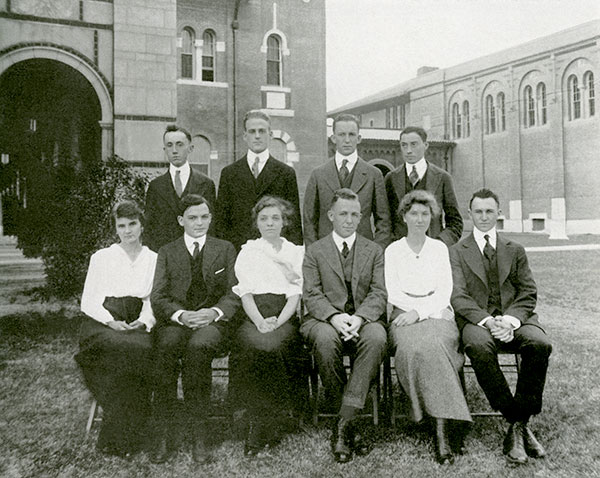 The Thresher’s first crop of editors, pictured in the 1916 Campanile, included editor-in-chief William M. Standish ’16, seated in the bottom row, fourth from the left. 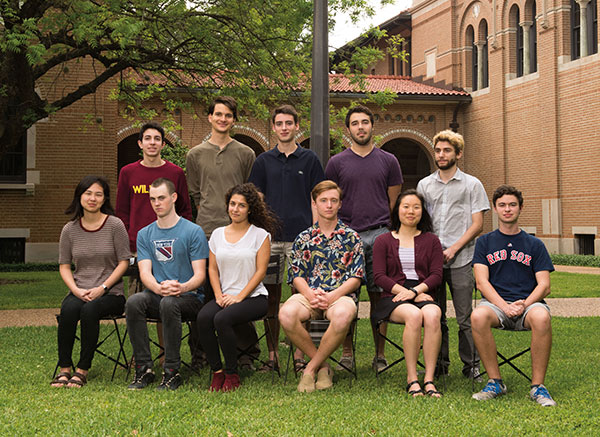 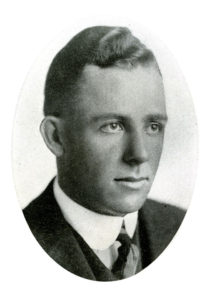 1916: The Thresher debuted Jan. 15, 1916, as a “fortnightly publication.” Willliam M. Standish, editor-in-chief, noted that it was about time, too. “Three years in our history have gone by without a means of voicing the opinions of the students.”

1917: The paper reported that Rice’s male students had begun training in military science and tactics “in the present national emergency.” Ads in the paper became increasingly oriented toward military clothing.

1918: Rice humor:
“Mary had a little lamp,
‘Twas filled with kerosene; One day the lamp exploded — Since then she’s not benzine.” 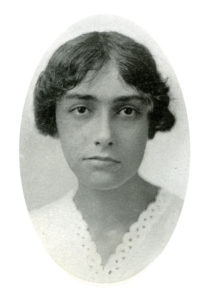 1920: The paper reported that Elizabeth Kalb ’16 dedicated a copy of “Jailed for Freedom,” a book about the campaign for women’s suffrage, to “the Girls of Rice.” Kalb took part in pickets and demonstrations and was arrested in January 1919. The 19th Amendment was ratified Aug. 18, 1920. 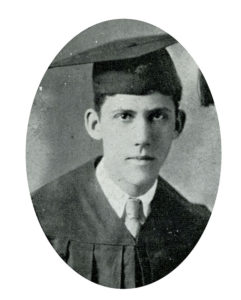 1926: T.R. “Theodore” Stubbs ’26 may have been the first — but not the last — editor removed from office. (His offense: publishing a serialized suggestive story called “Cold Feet,” set in an off-campus apartment.)

1931: A headline soberly intoned, “Seniors not sure of next year’s jobs since Depression.”

1939: A front-page article reported that Hitler’s “Mein Kampf” was reviewed via a Rice public lecture. The speaker warned that the book’s ideas might provoke “a world war greater than the last one.”

1943: Rice was on war footing, as stories like “NROTC Will Be Called To Active Duty” attested. 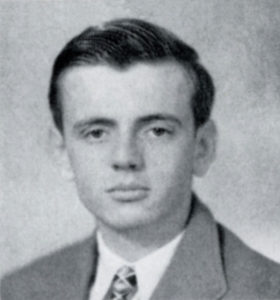 1947: Assistant editor Brady B. Tyson ’49 wrote an editorial asking students to share their thoughts on “the Negro question,” stating, “I believe that segregation is morally wrong, but that it is deeply rooted in the prejudices of the people of Texas, and I consider the people of Texas the salt of the earth in spite of this.” 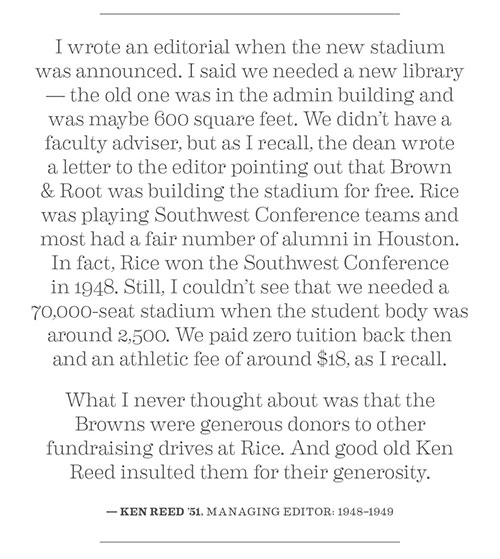 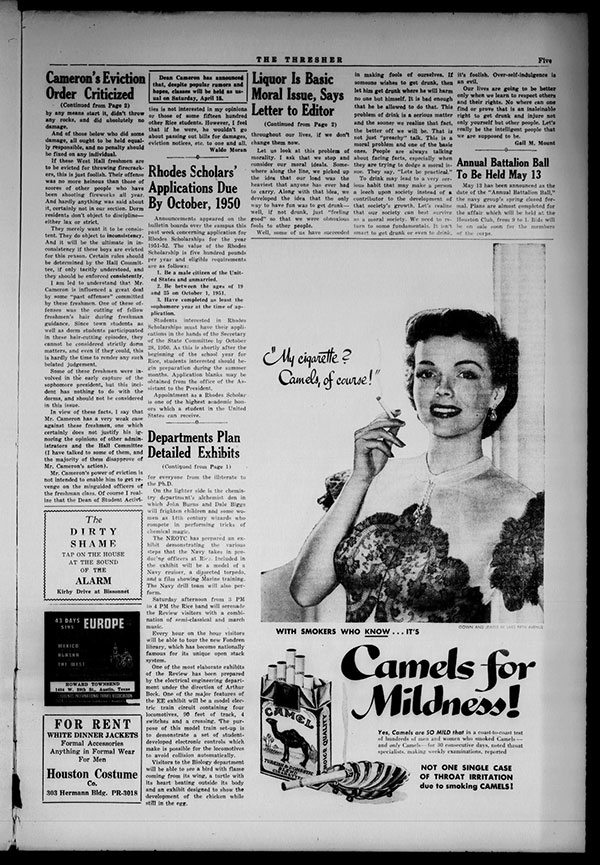 1950s: Cigarette ads featuring celebrities, coeds and catchy phrases (“Get the honest taste of a Lucky Strike”) supported Thresher production throughout the decade. 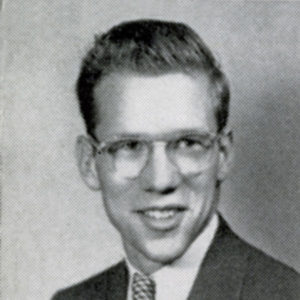 1951: In a column, editor Bill Hobby ’53 reported that Time magazine had characterized their generation as the “Silent Generation,” meaning grave, fatalistic, conventional and security-minded, among other adjectives.

1957: The first issue of the year announces the death (over the summer) of founding president Edgar Odell Lovett under the headline “Rice Loses One of Its Best Friends.”

1957: The last issue of the year noted that Baker College had won the first annual “Inter-College Bicycle Race.” The residential college system was just getting established. 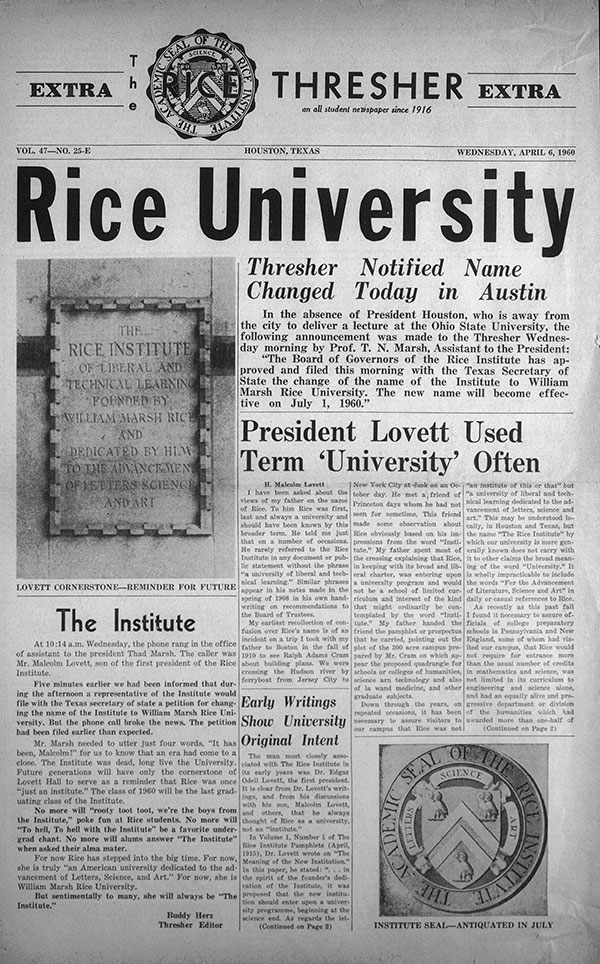 1960: There were mixed reactions to the renaming of the William Marsh Rice Institute for the Advancement of Letters, Science and Art to William Marsh Rice University. Senior class president Harry Reasoner ’60 said, “Unless it is necessary, it is regrettable.”

1963: On Dec. 4, President Pitzer reflected on a national tragedy. “As we recover from our shock and grief over the tragic murder of President Kennedy and the subsequent violence in Dallas, let us not fail to examine our own world and ourselves.”

1963: Paul “Prophet” Burka ’63, the only sports editor in history to fail PT 100 three consecutive years, earned a well-deserved reputation on  campus by the time his sixth-straight football forecast proved inaccurate; he spent each column explaining away the previous one.

1964: The Thresher followed the legal battle between Rice trustees and Rice alumni over changing the Rice charter to allow changes in tuition and the integration of the university.

1968: On the editorial page, a solemn dispatch, “Requiem in Atlanta,” recounted student Jon Glazier’s ’72 trip to Atlanta to join mourners for Martin Luther King Jr., whose body lay in state at Spelman College. 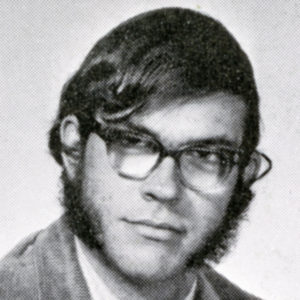 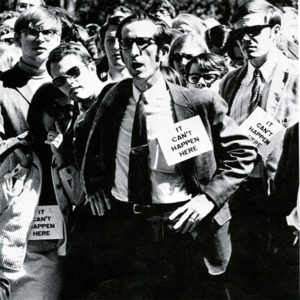 1970: The first issue of the academic year featured an editorial headlined “You cannot silence a generation.”

1973: The Thresher published an extended postmortem on the MOB’s “Salute to Texas A&M” halftime show, which enraged the Aggies, necessitating a police escort into the stadium tunnels and exit via food service trucks some hours later. 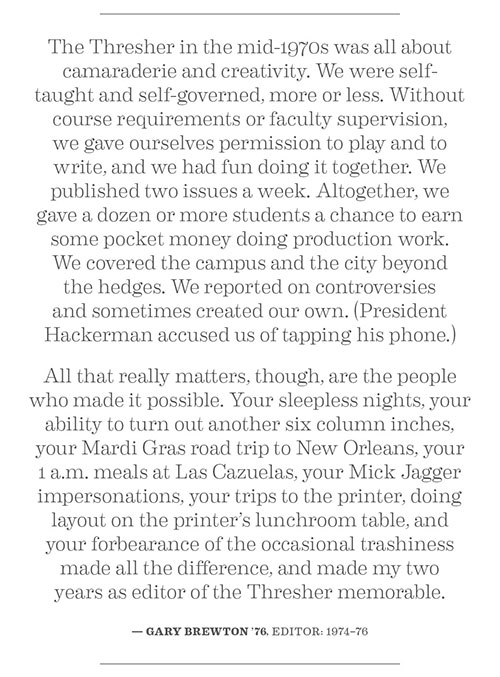 1978: A front-page story on Nobel Prize winner Robert W. Wilson ’57 noted that the Big Bang theory genius was known for repairing friends’ and neighbors’ radios and TVs in his spare time. 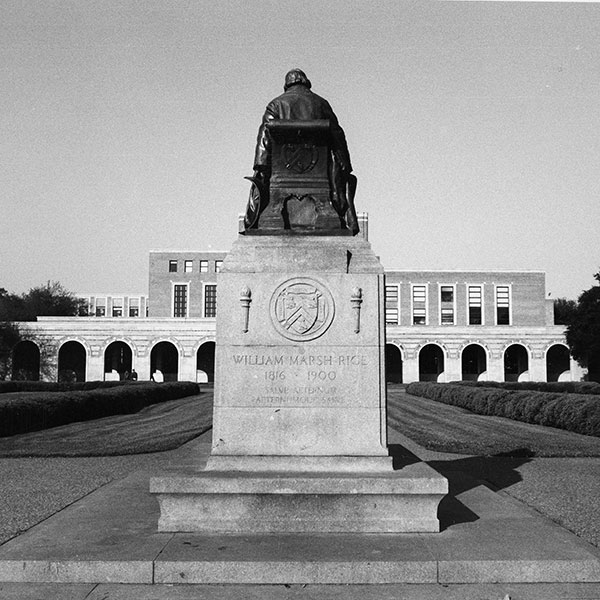 1988: In an April 15 article by editor Lisa Gray ’88, the Thresher recounted the aftermath of the Willy statue prank and helpfully included a schematic of the engineering feat. See it here.

1992: In an article headlined “Jacks Enliven O-Week,” Hanszen College master Dennis Huston urged students to show more creativity and less destructiveness. Example of the latter: “Sunday night before the freshmen arrived, Jones commons was washed down with vinegar. The same evening, the handrails at Sid were Crisco-ed, and the decorations at Lovett and Brown were watered and painted over.”

1996: The Rice Republicans and the Rice Democrats offered dueling op-eds before the presidential election. One supported Bob Dole for president; the other attacked the Defense of Marriage Act. The comic “Doonesbury” ran on three full pages. 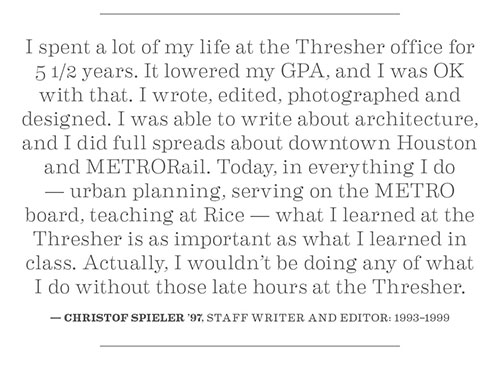 2001: President Malcolm Gillis was quoted in the aftermath of 9/11. “Don’t waste your precious energy trying to understand. Something this evil is beyond human comprehension.”

2004: An extended article examined the McKinsey report on Rice Athletics’ NCAA participation. Rice had been presented with a range of options for remaining in D1-A or changing to other NCAA levels. In August, the Thresher reported the board’s decision to stick with NCAA D1-A.

2008: On Nov. 7, the front page announced a bold new $1 billion Centennial Campaign, which concluded — successfully — in 2012. An editorial in the same issue noted the Baker 13/Fondren Library broken window incident and offered this comment: “To all Baker 13 runners: It is possible to be both naked and intelligent at the same time.”

2011: The Thresher published a special “centennial countdown” edition in October. An editorial noted, “Rice remains a top-tier research university, a consistently ranked best-value school and a launchpad for student initiatives.” 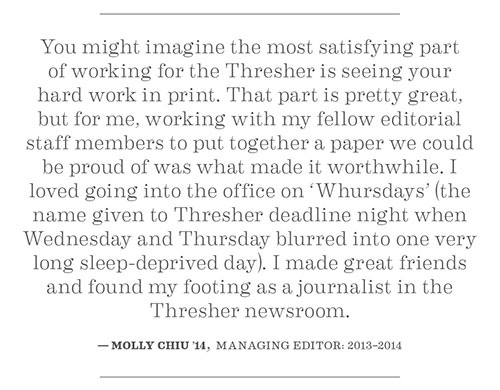 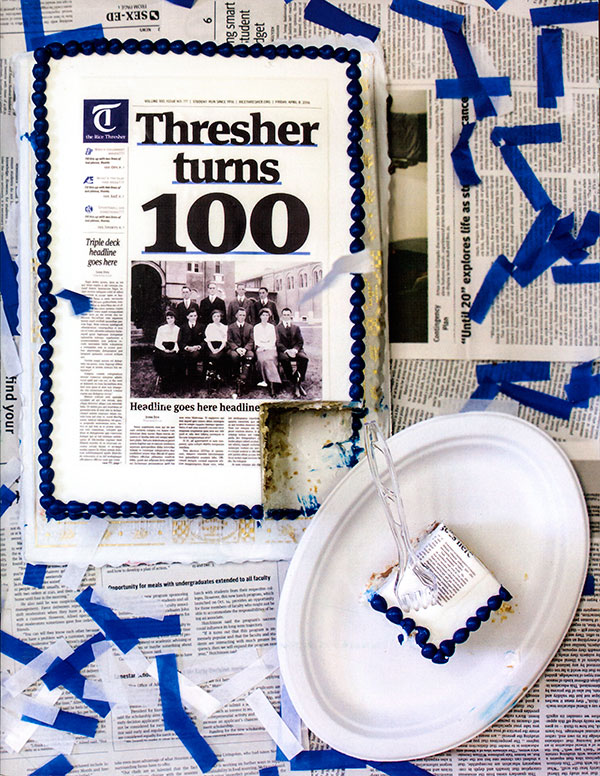 2016: The Rice Thresher turned 100 and published a commemorative issue. 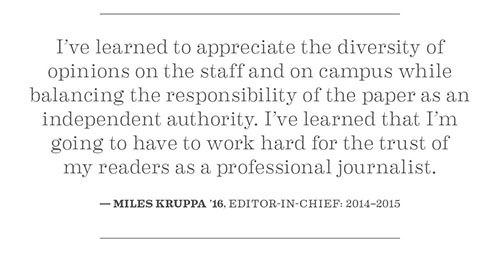 Related: No Grown-ups Allowed
Former editor Lisa Gray ’88 remembers what it was like to ask questions, break stories and chase deadlines for the Rice Thresher in the late 1980s and reveals why “clickbait” is the online equivalent of misclass.