As an Indian-American student who grew up in Tennessee, I thought my palate was pretty wide- ranging — until I moved to Houston to attend Rice. 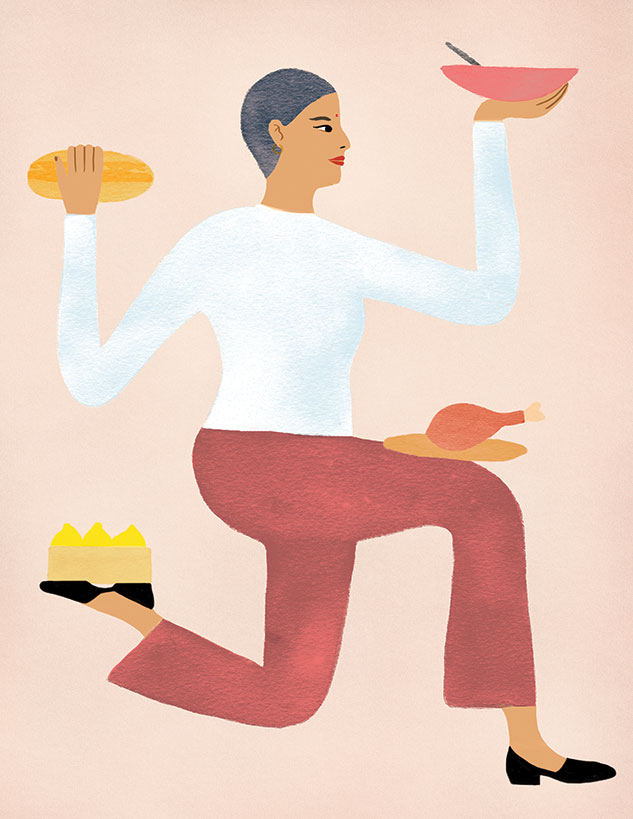 In August 2001, my parents rented a van, packed it with clothes, extra-long twin bedding and dorm decorations, and then drove me from Memphis to Houston — where I would attend Rice. At the time, I knew very little about my new city, having visited campus just once before. What I did know was that Rice immediately felt like home; my prevailing thought during O-Week was, “I will be happy here.” And I was.

Like many alums, I have Rice to thank for introducing me to my spouse and some of my closest friends, for shaping my career path, fueling my intellectual curiosity and exposing me to mentors who helped me discover myself and define my values. But I never anticipated that moving to Houston and attending Rice would completely change my palate and the way I think about food.

It’s not that I didn’t grow up around good food — my mother is an incredible cook whose repertoire includes specialty dishes from the Indian state of Punjab, where both of my parents were born, as well as a variety of international dishes; she makes a mean shrimp creole and a damn fine margarita.

Plus, Memphis is no slouch when it comes to food heritage; my girlhood memories are punctuated with meals of ribs and pulled-pork sandwiches (slaw on, please). But the culinary landscape of my hometown was fairly limited: barbecue, traditional Southern “meat and three” plates, cornbread and fruit cobbler. There were family-owned Italian restaurants serving favorites like lasagna and chicken Parmesan and some Tex-Mex restaurants that I later came to disdain in the way that only someone who has lived in Texas can.

Houston broadened my food horizons right from the start. I had never seen or tasted a banh mi, which is surely the best sandwich known to man. I was delighted that inexpensive, delicious and filling meals were just a short drive from campus. Much farther away was Chinatown, where my Baker College crew went for dim sum one weekend during freshman year. I’ll never forget my friends Isaac and Shining speaking Cantonese to the waitresses pushing carts of treasures around Ocean Palace’s giant ballroom. I’m still not sure what I ate that day — other than a rooster’s foot — but that was part of the excitement. College is, after all, about new adventures.

In my senior year, I started learning to cook, thanks in large part to a class taught by Chef Roger Elkhouri. We would meet late on a weeknight evening, after the servery had closed, and Chef Roger would teach us how to prepare everything from fresh mozzarella to herb-crusted pork tenderloin. More than just recipes and techniques, Chef Roger passed along his enthusiasm for food and his insistence on precision balanced with a sense of play. It was through his class that I discovered the deep sense of joy that I feel when I am able to feed someone I love.

During that year, I instituted “family dinner” on Sunday night at the rental house I shared with three of my best friends. Each week, I’d attempt a new recipe, spending all day in the kitchen, sending friends Dave and Phil out to Fiesta grocery store for ingredients, recruiting Rebecca to dice and stir, while we sang loudly (and badly) along to our old-school, pre-Pandora-era mix CDs.

Though I now live in a Houston suburb with my wife and son, family dinner still reigns — and not just on Sunday nights. My son, who is almost 5, has been my sous chef since he was a toddler. He loves to measure ingredients, flip pancakes and chop vegetables. His palate is already a million times more diverse than mine was when I came to Rice: hummus, dosa, cochinita pibil, Bolognese sauce, pimiento cheese, challah, lemongrass tofu — all rotate through his daily life. And when he’s sick? I cook him chicken soup, using Chef Roger’s recipe. 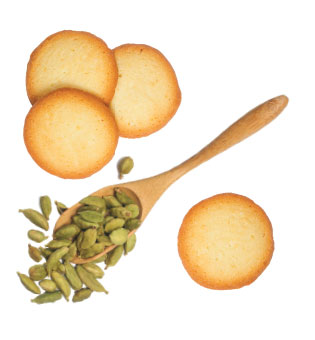 Mehra created this recipe in honor of Diwali, the Hindu festival of lights. It was originally published on her blog, bluejeangourmet.com

Optional: 1 egg, plus sanding or regular sugar for decorating

Using the paddle attachment of an electric mixer, beat the butter and sugar together until blended. Mix in the vanilla, cardamom and salt. Add the flour in a few additions, stirring until a soft dough just comes together.

Gather the dough into a large disc, wrap in plastic and refrigerate for at least an hour. When you’re ready to bake, preheat the oven to 325 degrees.

Allow the dough to soften a bit before rolling it out to quarter-inch thickness. Cut out any shape your heart desires, placing the cutout cookies on parchment-lined baking sheets.

Optional: Before baking, brush the cookies with a bit of egg wash (1 egg beaten, thinned with water), then sprinkle with sugar.

Bake cookies 15–20 minutes, until golden brown. Transfer to racks and cool 10 minutes before eating warm (with tea!), or cool completely to store in an airtight container.