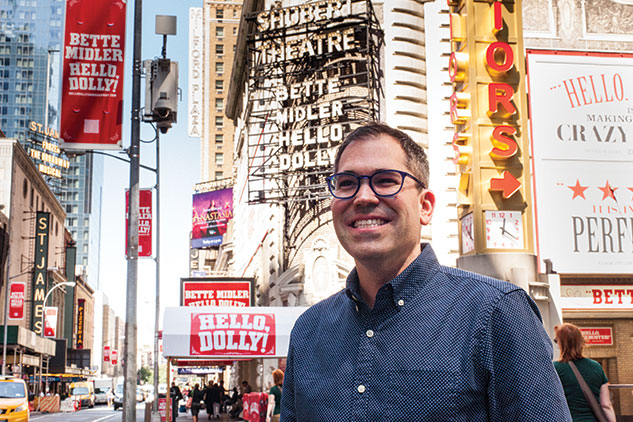 With a baton in his right hand, Andy Einhorn ’04 conducts a 23-piece orchestra from a podium underneath the Shubert Theatre stage, as a sold-out Broadway audience revels in the latest hit revival of “Hello, Dolly!” His left hand extends out of the orchestra pit, making grand sweeping gestures that direct the musical’s singers, which includes star performer Bette Midler, who has returned to Broadway for a one-year run. Einhorn is the show’s musical director and, during performances, serves as a lively conduit between stage and audience.

As the musical unfolds, he hunches over to listen for cues amidst the waves of applause, holding his finger out to signal the musicians to play. He beams when his favorite song — “Put on Your Sunday Clothes” — reaches its feel-good conclusion. “You can feel the audience smiling when we play that song,” Einhorn says. “It makes people vibrate with euphoria.” After a song ends, he scribbles notes to share during the next rehearsal, when the show’s fine-tuning continues, day after day, week after week.

“Our DNA as musicians is to grow and change, to have an element of humanity inside of it,” he says in his dressing room during intermission. “It’s always a fine line between what has been set, and how it gets performed night to night.”

On this July evening, Einhorn had arrived well-rested after his backup led that day’s rehearsal. He needed a break. The two previous days, he’d run auditions for the revival of another Broadway classic, “Carousel,” which he’ll conduct in 2018.

“Our DNA as musicians is to grow and change, to have an element of humanity inside of it,” he says in his dressing room during intermission. “It’s always a fine line between what has been set, and how it gets performed night to night.”

He prepares for the evening in his cramped dressing room, with its electric keyboard, three pressed tuxedo shirts, a bottle of Veuve Clicquot and a box of Brach’s jelly beans,  for which Einhorn confesses an obsession. He picks at a salad before heading upstairs to take up his baton.

“Hello, Dolly!” marks Einhorn’s return to Broadway, a year after he did “Holiday Inn” at the Roundabout, and three years after he was the musical director of Woody Allen’s “Bullets Over Broadway.”

Those Broadway engagements were stops along Einhorn’s joyful journey in the upper echelons of New York’s world-renowned musical scene. In April 2016, he conducted the New York Philharmonic, which featured jazz trumpeter Chris Botti and his trio, at the Lincoln Center for the Performing Arts. He also had a two-month run in Paris with Stephen Sondheim’s musical, “Passion.” All the while since 2011, he has worked as six-time Tony Award winner Audra McDonald’s musical director and pianist, accompanying her at Carnegie Hall, The Philadelphia Orchestra and the San Francisco Symphony.

Growing up in Houston, Einhorn performed at the Alley Theatre and Theatre Under the Stars. At Rice’s Shepherd School of Music, he started out in voice, then switched his major to piano.

Midler’s star power gave her the privilege of selecting the musical director for “Hello, Dolly!” Einhorn recalls that he was among 10 who sat for interviews with the Divine Miss M, who hadn’t done a musical since 1964. Einhorn’s second interview sealed the deal.

“She started on the stage, and then moved to movies and concerts,” says Einhorn. “How would she sustain herself for a year, doing seven shows a week? I coached her through all the material. We had a great rapport.”

In her acceptance speech for winning the Tony for best leading actress, Midler enthusiastically praised her musical director: “Thank you to the man who kept me from crashing and burning a million times — Andy Einhorn.”

The show is playing to sold-out audiences, with last-minute attendees paying as much $1,800 online for an orchestra seat. The musical swept the 2017 Broadway awards season, winning best musical revival from the Outer Critics Circle, Drama Desk and the Tonys.

In her acceptance speech for winning the Tony for best leading actress, Midler enthusiastically praised her musical director: “Thank you to the man who kept me from crashing and burning a million times — Andy Einhorn.”

As the curtain falls this evening, Einhorn blows Bette Midler a kiss. He trades his tuxedo for a T-shirt and jeans and takes the train to 107th St. to hear a friend’s band perform at a neighborhood tavern. He says tonight’s performance reminds him of his answer to Midler’s question of why someone his age wanted to do “Hello, Dolly!”

“I told her I always wished I was born in the Golden Age of Broadway, when Rodgers and Hammerstein and Jerry Herman were pop composers of the day,” he recalls. “That’s old Broadway. To relive it again in 2017 would be a real dream come true.”