For the staff who ride out the storm, planning and preparation take center stage — but improvisation steals the show. 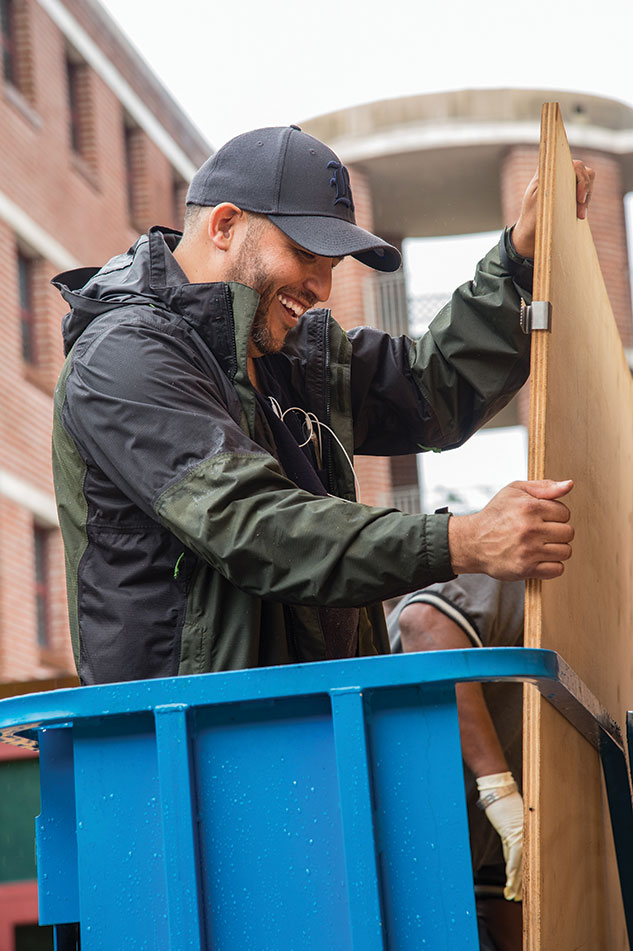 Long before the last case of bottled water disappeared from the shelves of every grocery store in Houston, Rice staff members were deep into storm prep mode. Grounds personnel boarded up windows; cleared debris from drains, roofs and roads; and secured construction sites across campus. Generators and campus vehicles were fueled up. Dining managers ordered extra helpings of nonperishable food — two tractor-trailers full, in fact — which were chained down in delivery bays as a precaution against high winds. Building crews installed flood gates around vulnerable entrances and stairwells, and radios were tested.

These tasks are part of standard operating procedures, said Kathy Jones, associate vice president for Facilities Engineering and Planning. “In terms of a hurricane, we have an emergency preparedness plan. Once the storm moves into the Gulf, we rally the troops to go over it.” A critical part of such plans is to designate “essential personnel” to stay on campus for the duration of the crisis — the ride-out teams.

About 150 Rice staff members from the offices of Housing and Dining, Facilities Engineering and Planning, and Rice University Police Department and other key personnel functioned as the ride-out crew. In advance of the storm, these staff members went home to prepare their families before trading their regular work shift for a 24-hour stay. They set up cots in offices; some teams stayed in a nearby hotel. Along with the Crisis Management Team and college magisters, deans and RAs, the ride-out crew took care of the Rice community, its people, classrooms and research facilities — and our hungry resident squirrels. When Harvey’s challenges defied the unexpected, the ride-out crew improvised. 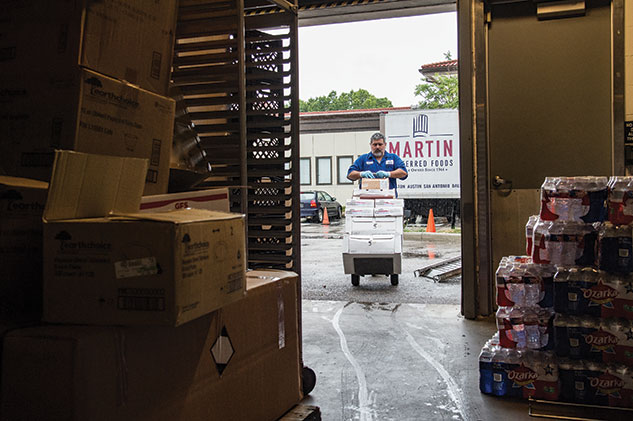 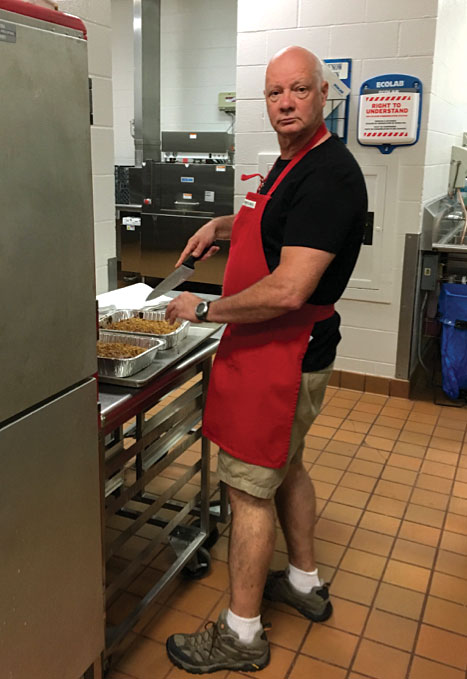 In addition to the 3,000 residential college students normally on campus, off-campus students were invited to stay with friends and eat in the serveries. One of the immediate problems that arose, noted Jerusha Kasch, the director of institutional crisis management, was “sustaining our campus population with the food storage on hand.”

Mark Ditman, associate vice president of H&D, had faced this challenge numerous times in his more than 20 years at Rice. “We’re prepared to easily feed people for three days at any time,” Ditman said. “The big surprise [of Harvey] was just how long this thing lasted.” Ditman was one of more than 50 H&D staff members who volunteered to ride out the storm on campus or in a nearby hotel.

“We rationed a bit, offering brunch and dinner for a few days,” Ditman said, which is the same dining schedule normally offered on Sundays. “Nobody complained,” he said. When the produce companies couldn’t make deliveries and the serveries ran low on perishable foods, a high-clearance loaner vehicle was found to make the resupply run.

When Rice administrators decided to open the Sid Richardson College kitchen for meals Sunday, Aug. 27, many cooks were not able to get to campus. The magister, RAs and students stepped in to help Chef Sarah Finster prepare, cook and serve meals. “Sarah trained a small army of Sidizens to work in the kitchen … until the regular H&D kitchen staff was able to return to work,” said Ken Whitmire, Sid Rich magister. “Chopping fruits and vegetables really got some of the students excited and happy to help with meal prep,” Finster added.

“I’m really proud of our staff,” said Susann Glenn, manager of communications for H&D. “One thing we know how to do is take care of people.” 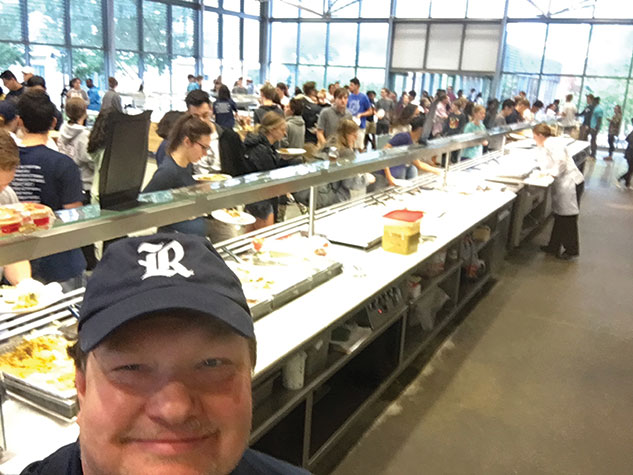 When Hurricane Ike hit Houston in September 2008, the ride-out team spent one day on campus. Harvey’s five-day ride out was “very unusual,” said Jones. During Harvey, 40 FE&P staff members worked around-the-clock, making daily early morning rounds, cleaning drains and responding to reports of leaks across campus, including flooding in the basements of Allen Center and Rice Memorial Center. Through the emergency website, the Rice community could monitor which buildings were affected and follow the progress of repair, a communication policy designed to reassure concerned faculty and student researchers. 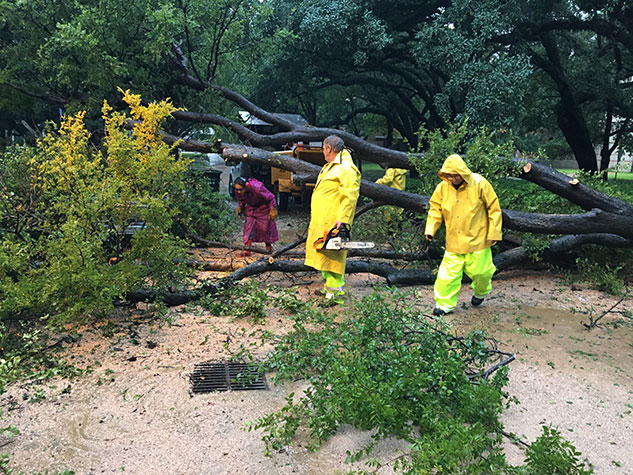 The grounds crew removes a fallen tree after the storm, one of seven trees that succumbed to Harvey on Rice’s campus.

“This was a severe water and rain event,” said Bart Salmon, assistant vice president for facilities. “We didn’t see winds at more than 30–35 miles per hour.” Though new to Rice, Salmon is no stranger to Houston and its storms, having experienced hurricanes Rita, Ike and Gustav while working as a regional facilities director for a major retailer. More than once, the ride-out team’s quick response prevented minor damage from turning into major headaches.

For example, in Tudor Fieldhouse’s basement, a sump pump tripped and didn’t re-activate, resulting in a pool of water 6 feet deep. The solution, caught on a short video, was to have plumber John Ramirez commandeer a kayak from the rec center and paddle in. Once the electrical system and the pump were repaired, the water naturally drained away.

Standing Up for Students and Community

During Harvey, Chief James Tate stayed on campus with almost 40 RUPD staff members and officers. The ride-out team moved onto campus Friday, and the rain started Saturday night. “When we woke up Sunday morning, we realized we had a mess,” Tate said. While dealing with high water across campus, which forced officers to get around by bike and foot, some unanticipated requests — and one very welcome offer — came through dispatch.

By a stroke of luck, Jeff Myers, a local businessman and the husband of Rice alumna and computer science lecturer Risa Myers ’13, had a high-clearance truck that he offered to loan to RUPD.

“One thing we didn’t anticipate were the calls for help from students who were stranded off campus,” Tate said. The most dramatic example was the rescue of two international graduate students from their off-campus apartment building near Brays Bayou. Biosciences graduate student Sapna Chhabra was one of the students calling for assistance in escaping her second-floor apartment. Below her, all of the first-floor apartments were flooded. Capt. Clemente Rodriguez and officer Jermaine Fazande used Myers’ truck to maneuver as close as possible to the apartment, then took turns walking through the dark, shoulder-deep water to the apartments. Fazande led Chhabra by the hand back to the truck. “It was the scariest walk of my life,” she said. Rodriguez found the second student, and soon they were both in dry, safe dorm rooms on campus. “Everyone was super helpful,” said Chhabra. 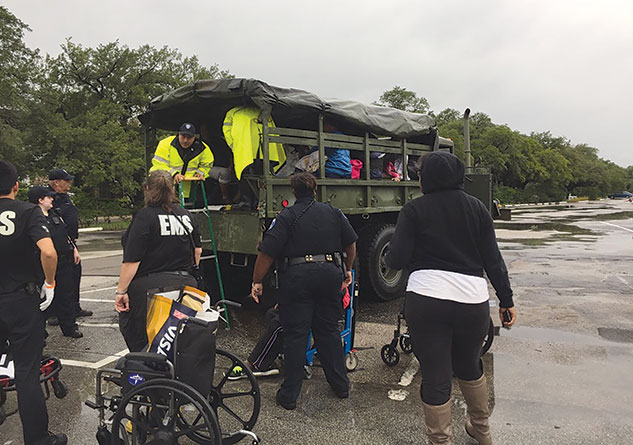 That same day, an urgent request came from the National Guard to land on Rice’s stadium parking lots. Over a two-hour period, eight helicopters landed, depositing dozens of people needing transport to nearby medical centers and those seeking shelter at the George R. Brown Convention Center in downtown Houston. Officers and Rice EMS students helped move the evacuees — many of them senior citizens — from the helicopters to Myers’ truck or other transport vehicles. “It was a really humbling and noble thing,” Tate said. “None of us could have predicted that.” Myers drove some of the evacuees to shelters himself.

“In emergency situations, the plan you have is not always going to be the solution,” said Tate. “You’ve got to be able to figure out how to make this work and be safe. I’m so proud of our folks.”