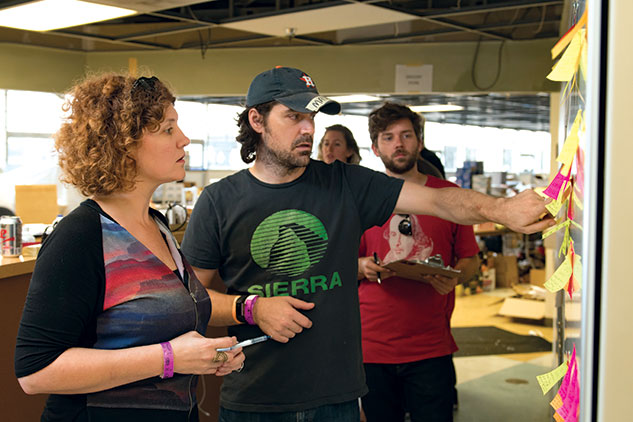 Matthew Wettergreen ’08 watched the flooding from Hurricane Harvey through binoculars from the 23rd story of the Midtown Houston apartment building he shares with his wife, event management consultant Claudia Solís. Although the lobby of their building flooded, they never lost electricity. “We were just sitting around feeling completely useless,” Solís remembered.

While tracking the flood’s effects on social media, the two watched as their Facebook pages began filling up with posts from friends in the restaurant and bar industry who were trying to coordinate food deliveries to emergency shelters around the city.

That’s when they came up with the idea of IHaveFoodINeedFood.com, a web-based clearinghouse for food donations. The site matched commercial kitchens willing to cook food for shelters and first responders in the desperate days after Harvey. Wettergreen, who has a doctorate in bioengineering from Rice, teaches in the Oshman Engineering Design Kitchen (OEDK), a hub for Rice undergraduates to design, prototype and test solutions to real-world engineering challenges. With help from OEDK Executive Director Amy Kavalewitz, he created the website in less than an hour, and it quickly became a critical hub for food relief efforts in Houston. In fact, the website proved so successful that some Florida nonprofit groups employed a version of it to help coordinate relief efforts during Hurricane Irma.

To help facilitate the food exchange, Wettergreen, Solís and publicist Jonathan Beitler set up operations in the Midtown Kitchen Collective, a newly opened full-scale commercial kitchen in the building that formerly housed SEARCH, a homeless services nonprofit. The space was donated by Adam Brackman, a local entrepreneur who himself went on to rescue dozens of people stranded in their flooded homes as a result of Harvey’s record-breaking rains.

Houston’s tight-knit food service industry embraced the effort. Under the direction of Houston chef Richard Knight, the temporary Midtown Kitchen ended up cooking and delivering between 200,000 and 250,000 meals to Houston evacuees. At its peak, the kitchen had 200 people volunteering and was producing around 1,800 sandwiches an hour. “One of the reasons we’ve been successful is that we don’t ask for permission,” Wettergreen said. “We’re agile, and we have the connections that allow us to make things happen quickly.”

During a visit to the kitchen Sept. 9, its next-to-the-last day of operation, several dozen volunteers were cooking penne Bolognese and spooning it into large aluminum trays to be delivered to churches and shelters. All the ingredients were either donated or purchased with donated money. Many of the volunteers, most from the bar and restaurant industry, had worked 12-hour days for over a week straight. Some of their own restaurants lost power during Harvey; others were taking time away from their restaurants to help the cause.

As the ad-hoc relief kitchen disbanded, Wettergreen said the initiative showed that grassroots relief efforts can be just as effective, if not more so, than government programs. “Houston is our house,” he added, “and we have to take care of our house.”