In Harvey’s wake, the Rice community mobilized hands, hearts and minds to help a storm-tossed Houston. The generosity of spirit that characterized Rice’s immediate response to Harvey’s devastation took many shapes. 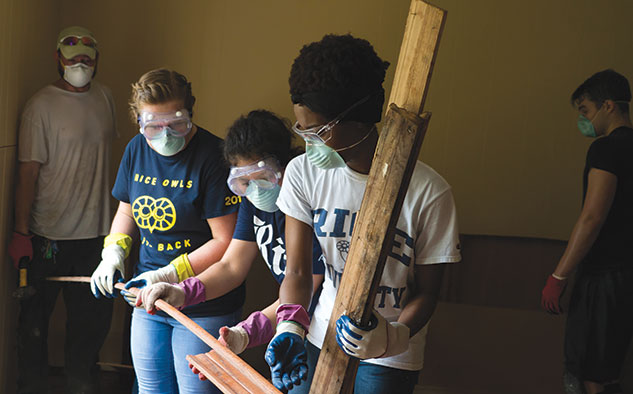 Rachel Mooers pulled her viola to her chin and nodded to harpist Caitlin Mehrtens before launching into the soothing notes of “Ave Maria.” About three dozen attentive listeners nodded and smiled throughout the performance in the community room of the Salvation Army women’s shelter. The Shepherd School graduate students, also accompanied by violist Zoe Loversky, a senior, had volunteered their services to various shelters during Harvey’s wake. “I can’t give a thousand dollars to the Harvey relief effort, but I can play music for people. It’s this idea of figuring out what you have to give and then giving generously.”

Baker College students mucked out the flooded home of Scott Solomon and his family. Solomon, a professor in the practice in biosciences, and Catharina Horth Solomon, a pediatric nurse practitioner, just completed a seven-year term living on campus as Baker College RAs and moved into their new home over the summer. In addition to their work and RA duties, they have three children of their own. Harvey’s 20 inches of water was an unwelcome housewarming, sending the whole family wading through waist-deep water. Like many flooded faculty and staff members, they’re in temporary housing for the time being. “There was overwhelming support,” Solomon said, “just carload after carload of people from Rice.”

The Rice Horn Crew traded their formal wear for work clothes. The French horn players helped clean up the water-damaged homes of professors, friends and alumni. At percussionists’ homes, the cleanup routine included “sanitizing” instruments. “Fortunately,” said junior Spencer Bay, “I have a summer job in maintenance and other crew members have some experience in construction and contracting, so we had done that kind of work before.” By mid-September they were back in the routine of rehearsals, performances and competitions. “I am extremely proud of my students,” said William VerMeulen, professor of French horn. “They show that, through ensemble, students can touch souls on and off the stage.”

As soon as the George R. Brown Convention Center opened as an emergency shelter, a group of MBA students volunteered to work night shifts. “That first night, GRB went from about 2,000 to 7,000 folks,” said Greg Besozzi, an MBA student who organized the effort. “We handed out dry clothes all through the night.” The next night, Besozzi borrowed a van from Rice Athletics and drove a group of volunteers to the BBVA Compass Stadium where they sorted through donations.

It would be impossible to recognize and enumerate all the hours spent by everyday heroes who lent a hand by sorting food and clothing, making room for guests, carrying soggy drywall to the curb and the most emblematic post-Harvey activity — mucking out houses. Volunteers played music, gave out toiletries and took care of other people’s young children. As a community, we wiped sweat and listened to stories. We cried for our friends and for our city. The needs of the city were as vast and swiftly changing as the waters that overflowed the bayous. The Rice community met these needs with hearts, hands and minds, creating a thoughtful and caring framework for volunteering.

By Sunday morning, Aug. 27, the widespread flooding and destruction caused by Harvey’s record-breaking rainfalls were apparent — and growing worse. Rice administrators closed the campus and canceled classes. A tireless Crisis Management Team continued to meet, monitor forecasts, respond to problems caused by flooding on campus and issue timely messages to the Rice community. Rice’s campus was holding up, but how were our off-campus students, staff and faculty doing?

The solution to that looming question, said Provost Marie Lynn Miranda, was to create a simple data-gathering instrument — a needs assessment survey. Klara Jelinkova, vice president for IT and chief information officer, led the team that built the survey, making it easy to fill out on mobile devices. Launched Monday afternoon, Aug. 28, the survey asked seven questions: What is your address? Do you have children? Has your house sustained water damage? Has your vehicle sustained water damage? Do you have power? Do you have access to the internet? What else do we need to know about you and your family? 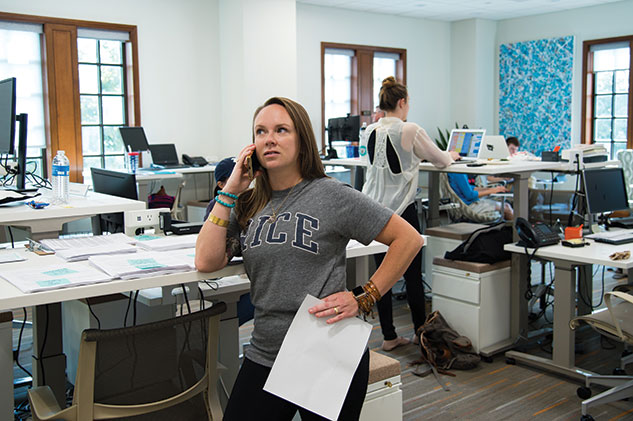 “You can actually answer those seven questions in about 90 seconds,” said Miranda.
“The total number of Rice students, faculty and staff is about 12,000. A little over 3,000 of them live on campus in our residential colleges, so that leaves just under 9,000 whom we wanted to fill it out. We ended up getting 7,900 completed surveys.”

The answers to the survey questions combined with institutional information produced a treasure trove of data that would drive decisions throughout the week — and into the post-Harvey recovery period, shaping Rice’s financial and other support programs.

For example, the survey confirmed that many staff, faculty and students were displaced from their homes. The IT team built a temporary housing matching tool, where people who had space to offer could register to help Owls who needed shelter. With so many schools flooded across the city, child care loomed as a big concern; in response, temporary child care partners were found. A carpool tool helped get those without cars to work. An Employee Disaster Assistance Program began offering grants and low-interest loans to faculty and staff for Harvey relief. Finally, in the open-ended question, people wanted to know how to help. A Rice hurricane relief fund was  set up to support Rice employees and students who have been affected by the storm and support Rice outreach activities to benefit Houston in its recovery efforts. 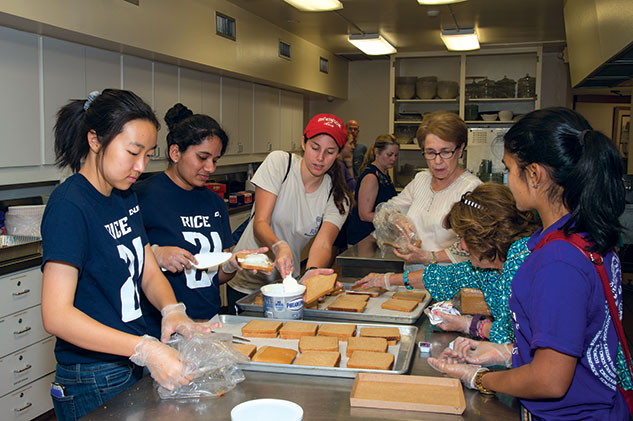 As Rice students rushed to help displaced Houstonians, a collaborative effort to provide targeted relief to the city and our Rice community members was in development. The Rice Harvey Action Team (R-HAT) began as an idea to recruit and match teams of Rice volunteers with nonprofits and individuals needing help after Harvey. The Doerr Institute for New Leaders, the Center for Civic Leadership and student government organizations ran the project, drawing in expertise from around the university to make it work.

“The provost had this vision of a robust endeavor to engage the student body in volunteering, and she wanted them to be engaged and contributing to the Houston community,” said Tom Kolditz, director of the Doerr Institute. Students were already going out on their own, responding to media reports about where volunteer needs were. “The students were so eager to get out and help members of our Rice community and other affected Houstonians,” said junior Justin Onwenu, Student Association president. But Rice had the resources to create a truly coordinated response.

By Tuesday evening, Aug. 29, the R-HAT framework had officially launched. The labor-intensive effort had many working parts: 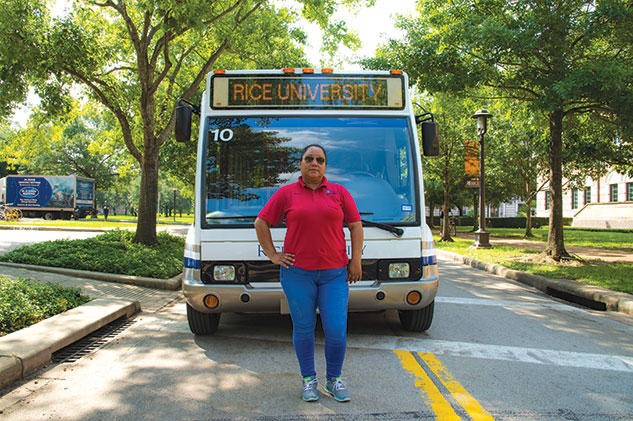 Samara Mendez, lead bus driver, went above and beyond to transport people when other drivers were unable to access campus. Photo by Jeff Fitlow

“[The R-HAT office] felt kind of like a startup,” said computer science professor Dan Wallach, who served as “the IT guy” throughout the week, sending thousands of emails to prospective volunteers and setting up SignUpGenius pages.

Rice volunteers began concentrating their volunteer efforts through R-HAT, streaming across the city and joining up with partners like the emergency shelters, Crosspoint Church, the Jewish Community Center, Black Lives Matter: Houston, Congregation Emanu El, animal shelters and individual homeowners. “A lot of us were not able to easily go back to our normal classes and work without thinking about all these people who lost everything,” said Ewa Nowara, a doctoral student in electrical and computer engineering. “I think it’s awesome that Rice had this very easy way of signing up.”

Between Aug. 31 and Sept. 4, R-HAT registered and sent out more than 1,400 volunteers who contributed 7,600 hours of volunteer work. In all, demo crews visited 70 homes. When Caroline Quenemoen, the director of inquiry-based learning at the Center for Civic Leadership, looks back at what the R-HAT team accomplished in that whirlwind week, she’s especially gratified by the way Rice helped its own community. “For me, it was really important that there was an internal [Rice community] as well as an external [citywide and regional] focus. Rice helping Rice saved efforts for the rest of the city, and we heard that from city leadership.”

Sophomore Carly Frieders worked in the NRG Center’s emergency shelter for a shift and then went to muck out and “do demo” for a Rice staff member’s home. “We helped pull up flooring, pull out some of the drywall, set all the trash and rubble out on the curb,” she said. “[People] were really resilient in the face of everything that had happened.”

Alumna Ly Nguyen ’17 helped clean out the home of four brothers who are Rice staff members. “It’s devastating, because I know they’re not losing just material things. There are a lot of memories in this house. There’s a lot more to it than just drywall being lost, wooden furniture and everything.”

Hurricane Harvey’s legacy to the region includes many economic, social and policy challenges. For Rice, the next phase is to leverage university expertise — public health, environmental impact, educational equity and regional planning, for example — in ways that will make a real difference in the city and region.

A key vehicle for this will be a new initiative, the Rice Houston Engagement and Recovery Effort (Rice HERE). Staff and faculty research proposals for the first round of funding were due in late October. R-HAT is still setting up volunteer opportunities throughout the city and has transitioned to working with the Student Association, the Rice Student Volunteer Program and the Graduate Student Association. 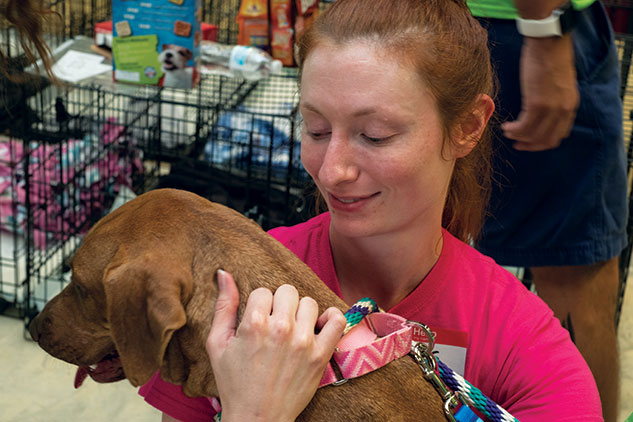 Student leaders have expressed both pride in their engagement during the crisis and a true desire to continue being involved in the recovery. In a recent Rice Thresher opinion piece, Onwenu and seniors Madeleine Pelzel and Maurice Frediere wrote, “The volunteer needs will continue beyond news reports of the disaster, beyond our immediate memory of ‘the week we didn’t have school’ and beyond tasks that can be immediately related to hurricane relief.” Sydney Gibson, president of the Graduate Student Association, said that post-Harvey recovery will be the focus of graduate student service projects throughout the year.

In addition to volunteering, Quenemoen expects students to engage in long-term academic projects with faculty and community partners. “I think this is just the beginning.”