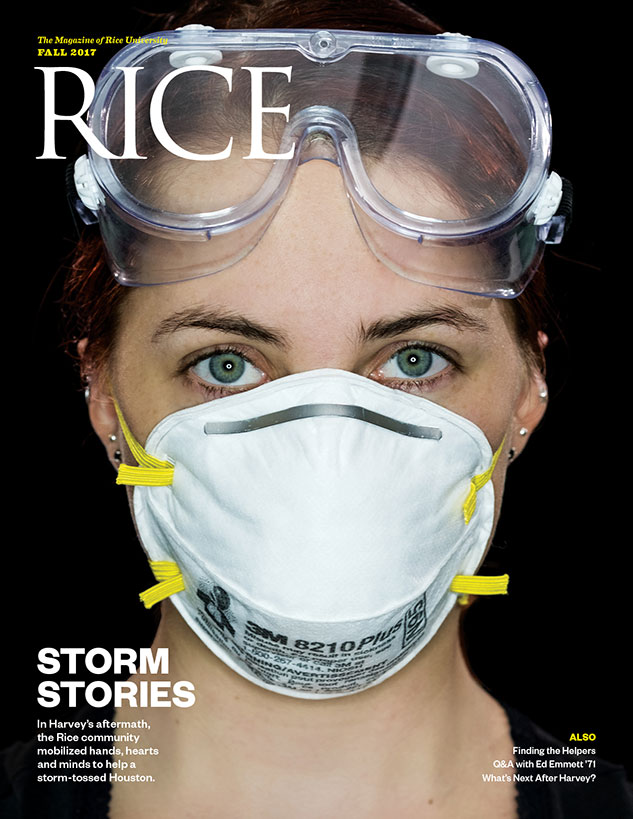 I want to commend you and your staff on your series of articles related to Hurricane Harvey- “Storm Stories”.  So proud to see so many with Rice connections pitching in and serving in any and every way possible.  It was especially gratifying to see and read about the volunteer spirit of the student body.  What a testament to the quality of people that Rice attracts and develops.
— Rick Ngo, M.D. ’94

Being a proud Lovett alum, I was interested to read about the Lovett traditions, but was a little surprised that no one commented on the real reason for the grating. When I was at Lovett, the masters had a scrapbook of Lovett history, and one of the early things was the architectural proposal for the new college. The designer talked about the grating and mentioned that it was (at least partly) there to prevent students from throwing water balloons off the college, except for the second and top floors that the designer assumed would be reserved for the older and more mature students. I assume that the materials that I saw are still with the college.
— Charles Hargrove ’91

In “Mind the Gap,” [a book review of “Mind the Gap: How the Jewish Writings Between the Old and New Testament Help Us Understand Jesus”] the author states that “Jesus lived in the first century CE, but the last books of the Old Testament were written in the fourth century BCE — that’s a gap of almost half a millennium.”

It should be pointed out that the books of 1 Maccabees and 2 Maccabees are part of the Catholic and Eastern Orthodox canons, even if they are not part of the Protestant Old Testament or the Jewish Bible. The Maccabees were a group of Jewish rebel warriors who took control of Judea. They founded the Hasmonean dynasty, which ended when Herod the Great became king of Israel and was designated “King of the Jews” by the Roman Senate, effectively transforming the Hasmonean kingdom into the Herodian kingdom. (Yes, that’s the same Herod the Great who appears in the Gospel of Matthew as the ruler of Judea who orders the Massacre of the Innocents at the time of the birth of Jesus.)
— Erich Wolz ’85

Editor’s Note: We asked the book’s author, Matthias Henze, the Isla Carroll and Percy E. Turner Professor of Biblical Studies at Rice, for a response, which follows.

It is a peculiar fact of the Christian Bible that the Old Testament takes more than one form in different Christian churches. The Old Testament of the Catholic and Orthodox Bibles include a group of books that are not included in the Protestant Old Testament or in the Jewish Hebrew Bible. These additional books are known as the Apocrypha. 1 and 2 Maccabees are part of the Apocrypha, and they may have been written in the second or early first century BCE. So, from a Catholic or Orthodox point of view, the gap between the Testaments is much shorter than it is for the Protestant Bible.