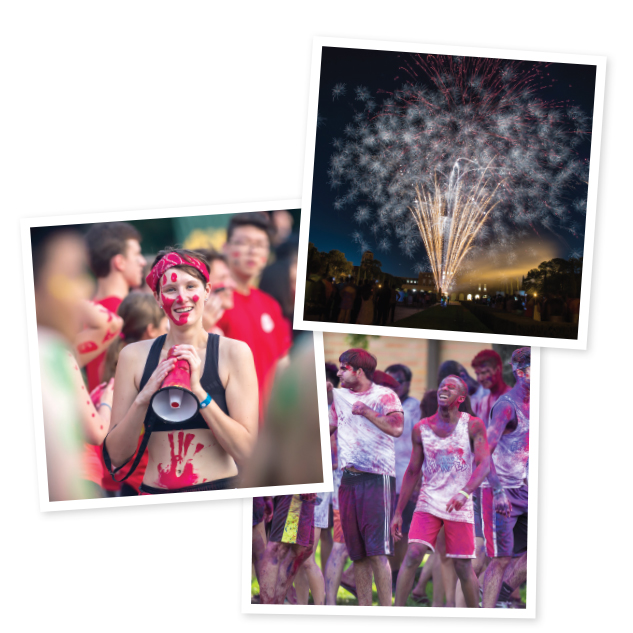 For many incoming freshmen, Orientation Week is the first time they set foot on the Rice campus. Over the years, the nature of the welcome has changed.

Bob Toone ’67 remembers arriving in 1962 to an unair-conditioned Will Rice College and voracious mosquitoes. He also had a special guest speaker during what was then called Freshman Week. President John F. Kennedy delivered his famous “we choose to go to the moon” speech before Toone and his classmates.

Another highlight, Toone remembers, was Freshman Slime Parade. “Wearing our freshman beanies, we snaked south on South Main, starting somewhere between the campus and the Medical Center buildings and ending up at the Shamrock Hotel for a pep rally,” Toone said. “Upperclassmen would pelt us with eggs and liquids as we traveled down the street, but I don’t remember it being too bad — more fun than anything.”

When Malcolm Gillis became president of Rice in 1993, his reputation as a gentleman farmer preceded him. At his first matriculation ceremony, some upperclassmen released chickens in front of the podium. Alex Gonzalez ’97 remembers the hubbub as “folks stood and craned their necks to get a better view, which created more commotion than the chickens themselves.” Gillis dealt with the disruption with aplomb. The new president “proceeded to identify the breeds of some of the chickens and maybe even sang a line or two about chickens from a tune I didn’t recognize,” Gonzalez recalled.

For Gonzalez and his classmates, Gillis had passed his first test. “His reaction showed that he was quick on his feet, but more importantly, showed that he could embrace the silly, quirky side of Rice culture.”

Freshman Week gradually morphed into Orientation Week, which came to be referred to as simply O-Week. Today’s freshmen are unlikely to experience slime or chickens during their first days at Rice, but that doesn’t mean they don’t engage in shenanigans.

Each college has its own customs these days. Brown freshmen, for instance, are urged to get a good night’s sleep Tuesday because they will be treated to a catered breakfast at President David Leebron’s house early the next morning. But around 3 a.m., they are roused from their slumbers by loud music and advisers pounding on their doors. Those who are willing go out into the night engage in a series of silly tasks — like bobbing for apples in a vat of maple syrup — that ends at dawn.

Brown College sophomore Zach Hutchings thinks that such traditions create bonds that last beyond O-Week. “One thing that’s unique about Rice orientation,” he said, “is it helps you make friends, not just meet people.”