Forget California — a Texas family found success in the mercurial wine business by growing the right grapes for the soil and climate of home. 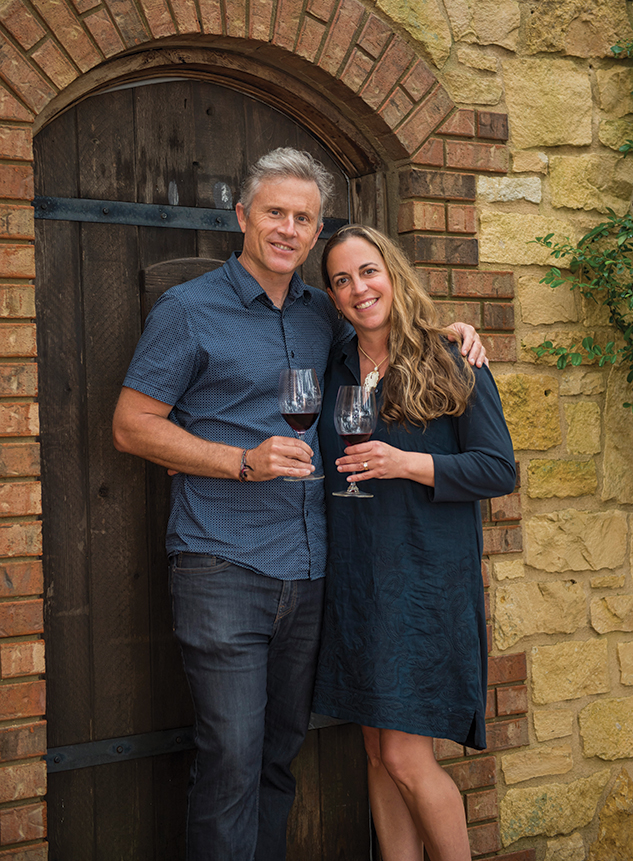 As Highway 290 wends its way toward the busy Central Texas tourist town of Fredericksburg, it becomes increasingly clear that the Texas wine industry is booming. Tasting rooms and vineyards are strung along the road like baubles on a necklace, along with billboards hawking $5 Sangria Sundays, the Wine Shuttle (“Taste! Ride! Relax!”) and something called the Sparkle Package.

Many of the buildings are of a faux-medieval style, their gaudy turrets and arches out of place among the prickly pear and juniper trees. One spot has an enormous wine barrel out front, calling to mind the scene in “Sideways” when a drunken Paul Giamatti pours a full bucket of red wine over his head and upper body. It’s all a little much before noon on a Sunday, which is why I breathe a sigh of relief as I pull into Pedernales Cellars.

No gimmicks here — only a broad, gently sloping lawn with a postcard-perfect view of the rolling hills. It feels wonderful to sink into a couch on the deck, shaded by a graceful canopy of live oaks, and watch barn swallows dart to and from the mud nests they’ve built under the eaves.

It’s not long before the Kuhlken family — David ’94 and his wife, Heather ’96; their three sons, ages 16, 13 and 8; and their shaggy black labradoodle puppy, Otter — all come out to say hello. David is the head winemaker and president at Pedernales Cellars, while Heather, who also runs an environmental nonprofit, leads sustainability efforts and takes photos. The kids soon run off to check their game cameras elsewhere on the 150-acre property. As part of a conservation plan they’re creating, they’re eager to see how many deer and other critters have visited. Meanwhile, David and Heather beckon me into their geothermally cooled wine cellar and start telling their story. 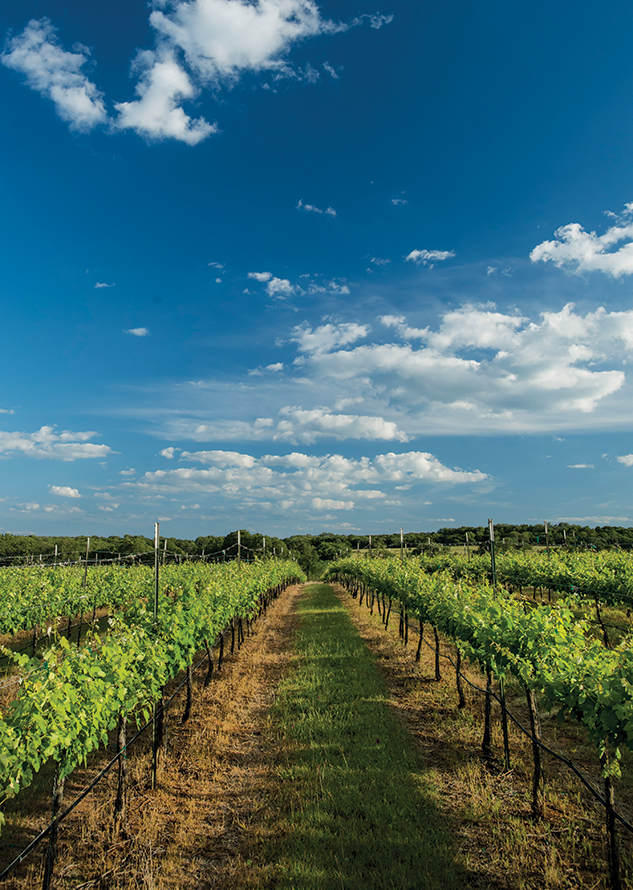 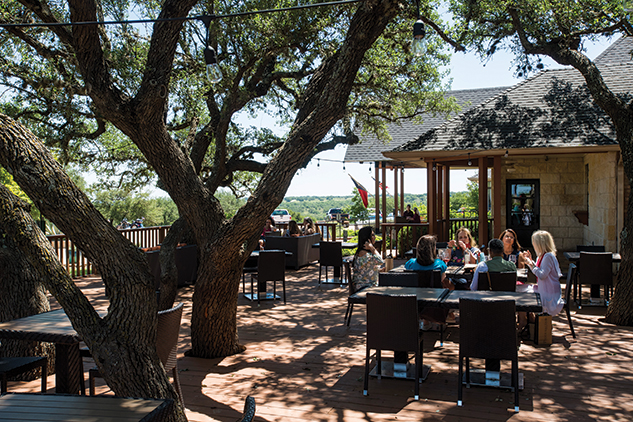 Great wine easily pairs with a perfect view on the patio. Photo by Tommy LaVergne 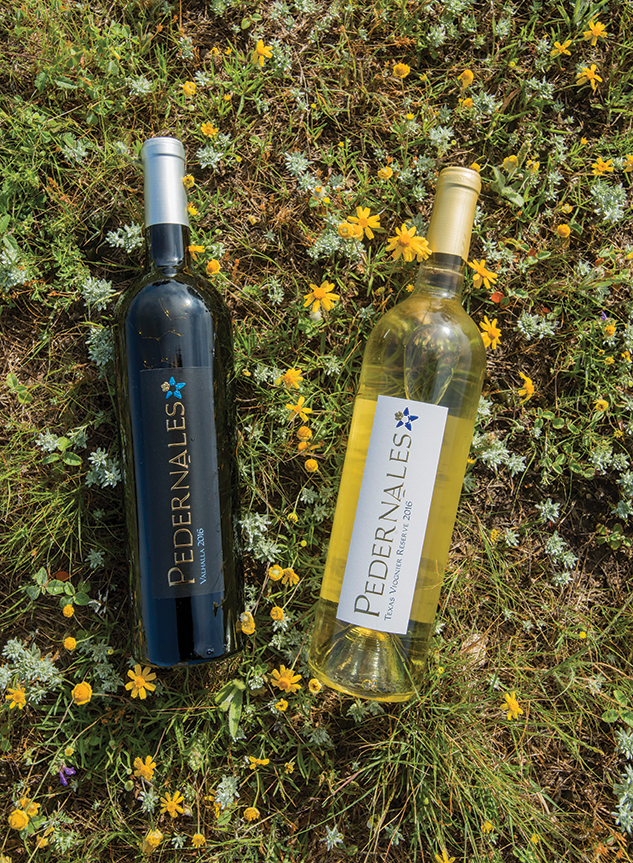 Wine runs in the family, as it turns out. “My parents first planted back in ’95,” David says, “when things were just getting started. And there were a few really good Texas wines, don’t get me wrong — but, frankly, it was a novelty thing.” Like other pioneer Texas winemakers, the original Kuhlken Vineyards focused on big-name varietals that were sure to sell — cabernet sauvignon, merlot and chardonnay. These were the grapes people knew and loved from California’s Napa Valley, but they were poorly suited to the mercurial Texas climate and harsh soil. Environment, or terroir, is key when it comes to wine, and though grapes adapted to the West Coast’s cool, consistent weather could be coaxed into growing here, the result was “mostly garbage,” David says. By the mid-2000s, winemakers had learned that Spanish varietals were best for Texas. “When we started planting things that were adapted to a warmer, more variable climate, that’s when we started having success,” Heather remembers.

Even as Texans quietly mastered great but obscure wines like garnacha and mourvèdre, the world didn’t seem to notice. For the Kuhlkens, that changed in 2012, when they entered their viognier in an elite competition in Lyon, France — and won a coveted double gold medal. “The tastings are blind,” David says, “so when they saw it was our wine, there was this crazy double take: ‘Oh, that’s from Texas?!’” More golds and double golds soon followed, in France as well as San Francisco, and two Spanish varietals, tempranillo and viognier, emerged as Pedernales’ top-shelf bottles. Today, the Kuhlkens are consistently ranked among the top winemakers in the state, and their wine club is more than 3,000 members strong. They’ve got a dozen full-time employees and produce an impressive 15,000 cases of wine per year. 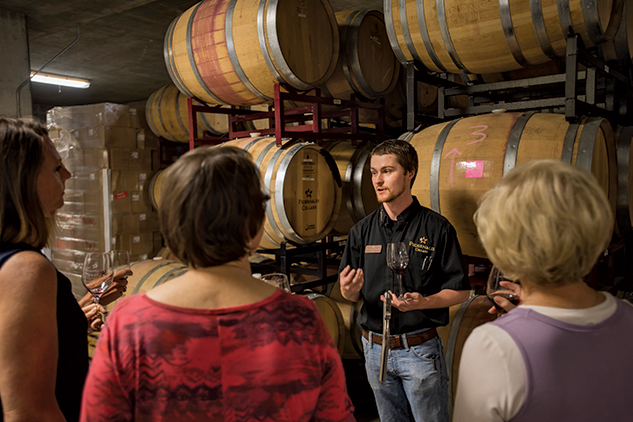 As the Kuhlkens’ star has risen, so has Texas’. There are now more than 300 wineries across the state, which is the nation’s fifth-largest wine producer. California still dominates, but within the last decade, Texas wine seems to have found its place. “With wine, you have to have a real sense of identity,” David says. “It’s taken a while to bring restaurants along, to show that there is a strong sense of what a Texas wine is — and we’re getting there.” A strong cooperative spirit persists, with Pedernales and other established vineyards frequently welcoming fledgling businesses to train, or co-op, using their facilities and connections. The still-growing market also offers entrepreneurs more creative freedom. “If you start a winery in Napa and spend the millions you need to do that, and then you say, ‘I really want to make [obscure wines like] teroldego and mavette,’ people will look at you like you’re insane,” David says. “There’s a target there that you have to hit. Here, we can play.”

While the state of Texas wine is rapidly evolving, the industry is not without its growing pains. Some of the biggest Texas wineries, unable to harvest enough to meet demand, ship in grapes from California — then claim to have grown them here. The Kuhlkens support the effort to pass a law requiring that anything sold as “Texas wine” be 100 percent Texas grown (currently, 75 percent is enough). How can you know you’re really buying a Texas wine? Avoid any bottle bearing the tricky phrase “For sale in Texas only,” which is a loophole allowing sneaky winemakers to pass off out-of-state grapes as their own. And for taste, you’re usually safer choosing hot-weather varietals like tempranillo and garnacha over cabernet or pinot noir.

It’s been a long road for David and Heather, who each worked for 10 years in software and education, respectively, before taking up the family business in 2006. Perhaps surprisingly, they weren’t wine fanatics from the start. “At Rice, I mostly drank Boone’s Farm,” Heather laughs. David adds, “I didn’t come at it because I was passionate about wine, particularly. But as an engineer and someone who likes the creative process, this is really appealing. Every year, you get a new problem to solve.” Though their work requires 70-hour weeks during “crush season” in the fall, they wouldn’t have it any other way. In the tasting room, a large, beautifully twisted cabernet vine is mounted over the bar: a reminder of how far they’ve come. 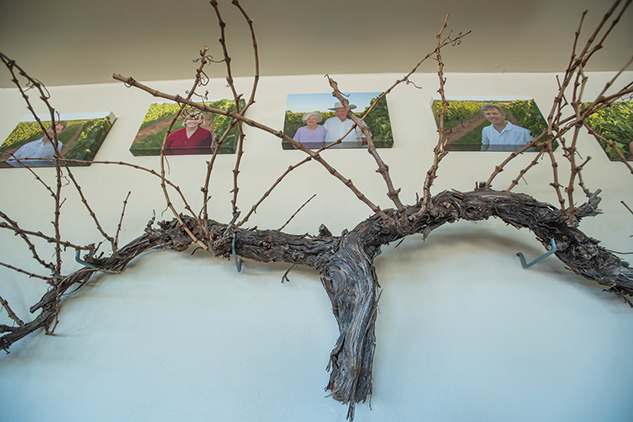 A cabernet vine hangs in the tasting room to remind the Kuhlkens of how far they’ve come. Photo by Tommy LaVergne