At Home on the World’s Stages

At Home on the World’s Stages 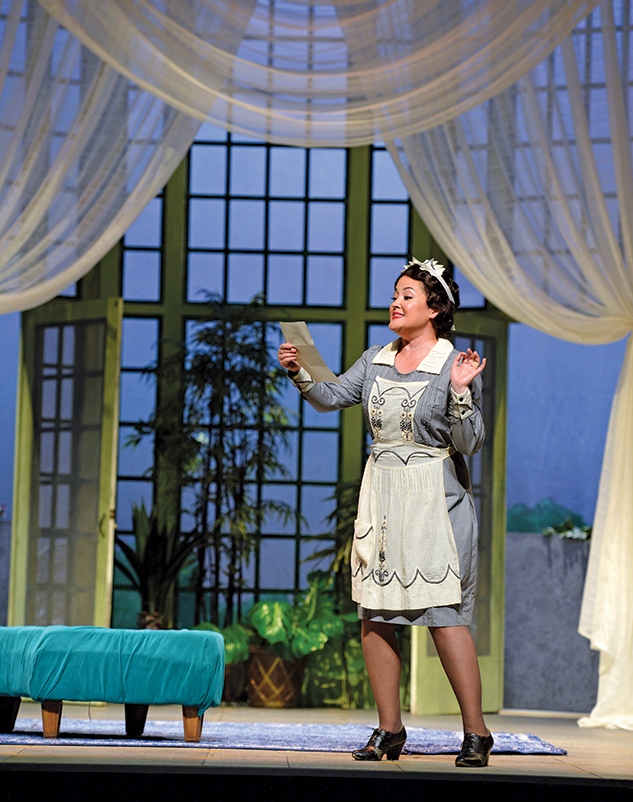 Photo by Duane Tinkey for the Des Moines Metro Opera

The life of an opera singer has taken Anna Christy Stepp ’98 to the world’s most famous stages — in the U.S., Europe, Japan and Great Britain. But one of her favorite audiences was at the gate of LaGuardia Airport in New York City.

It was the day after her Carnegie Hall debut in 2014 — a performance The New York Times later called one of the top 10 concerts of the year — and Stepp (who is known professionally as Anna Christy) was waiting to catch a plane. Her husband, Evan Stepp ’94, was traveling with her, but he’d gone to find the restroom. That’s when the gate attendant offered $25 travel vouchers to anyone who told a joke or sang a song over the PA system.

“I was like, ‘You know what, OK,’” she remembers. “I was still on cloud nine from the night before, still flying high on endorphins. So I sang a famous aria by Puccini. Everyone dropped what they were doing and stared at me; and when I finished, they cheered.”

Stepp received two travel vouchers out of the deal, and Evan returned to the gate none the wiser. In a career of rave reviews, the impromptu performance reminded her of the pure joy of singing.
“There’s something about the physical process that occurs when you take a breath and what you release is not just sound, it’s emotion,” she said. “Singing is universal, and it’s joyful. When my son is playing with cars, or he’s just had a nap or a snack, he’s singing. I used to sing in supermarkets as a child. We do it because it’s fun and more than a little bit addictive.”

In a recent performance of Johann Strauss’ comic operetta, “Die Fledermaus,” at the Des Moines Metro Opera company in central Iowa, she played a chambermaid who’s light on her feet and brimming with energy. Her voice sparkled (a staff member described her as “incandescent”) as the character, Adele, shirked her maid’s apron, donned a glittering evening gown stolen from her employer and won the affection of a Russian oligarch at a costume ball.

A graduate of Rice’s Shepherd School of Music, Stepp keeps close ties with former classmates and administrators. After Rice, she continued her studies at the University of Cincinnati’s College-Conservatory of Music. Her career took off immediately — the voice of a “light soprano” being among the first to mature — and she’s reached the heights of stardom, performing numerous roles at The Metropolitan Opera and gracing the stages of countless other opera houses around the world.
Accepting a role typically means living away from the Stepp’s Denver home for at least two months. Evan’s career as a physician sometimes affords him the flexibility to visit his wife in the far-off locales where she performs. Her children (“little Owls”) often come to live with her on location, especially during the summers.

“I have this particular gift that allows me to give my children exposure to the ways people live in different parts of this country and around the world,” Stepp says. “My goal is to help them gain a broad understanding, and I hope they learn to accept people for who they are.”
When they travel with her, the kids are often accompanied by a nanny, which allows Stepp to maintain the focus required of a performer. “I do absolutely nothing on performance days,” she says, which is only a slight overstatement: She goes for a run to boost her energy, practices yoga to stay flexible and engages in meditation to keep her mind focused. She avoids spicy foods because they might inflame the vocal chords, eschews sushi and other delicacies that might cause gastric distress and stays away from nightclubs or other areas where she might have to strain to be heard over environmental noise.

“The most taxing thing about the job, and the thing we give the most of, is our mental energy,” she says. “Whether you’re singing or not, if you’re onstage, you have to be completely dialed in to totally inhabit that character. When the show’s over, there’s so much adrenaline. I’m so excited and happy.” Whatever time she wakes up, and wherever in the world she rises, she needs only two things to be happy: her craft and her family.

“I find a market that I like. I wander the parks and find a playground for my kids — and I never get lonely, ever. Part of it is having the global community of opera. I’m at home everywhere.”

BONUS: Watch a clip of her performance as Morgana in the Sante Fe Opera’s production of Handel’s “Alcina.”