A digital archive is preserving memories of Hurricane Harvey. 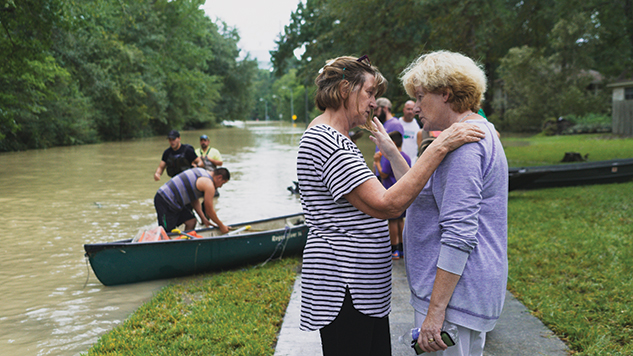 The goal of the Harvey Memories Project is to build an open-access digital repository to collect, preserve and publish community-contributed memories of the storm in multiple formats, including photos of storm preparations and cleanup, audio and video recordings of the storm in progress, survivors’ narratives and even art.

“Everyone was on social media during Hurricane Harvey,” said Caleb McDaniel, associate professor of history and one of the eight Rice collaborators on the project. “It was probably the most digitally mediated natural disaster in U.S. history.” Time magazine called the August 2017 hurricane the nation’s “first social media storm.”

Inspired by such projects as the Hurricane Digital Memory Bank, which houses artifacts from hurricanes Katrina and Rita, and the Boston Marathon bombing digital archive Our Marathon, the Harvey Memories Project was created. “You don’t want all that stuff to get lost and never preserved or archived in a way that future generations can access and learn from,” said McDaniel.

“That’s where librarians come in,” said Lisa Spiro, executive director of digital scholarship services for Fondren Library. Any photos, videos, oral histories or other digital donations to the Harvey Memories Project will be professionally processed, cataloged and archived at Rice. Online, the archive is both permanent and easily accessible.

Spiro and the team are planning outreach events at local libraries and community centers to reach those whose stories have not yet been shared or heard.

In the meantime, the Harvey Memories Project is open for those who are in search of a place to tell their own tales. Many of those affected by the storm have only recently begun to get back on their feet, let alone process or preserve the memories of what happened when 30 trillion gallons of water fell along the Gulf Coast. “We also hope that this will help people to heal,” Spiro said. For more information, visit harveymemories.org.