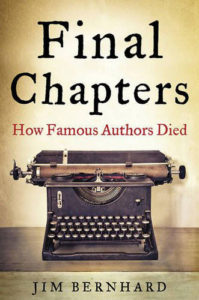 Some authors’ deaths merit more than footnotes. There are the suicides of Plath, Woolf and Hemingway, as well as some that are equal parts bizarre and tragic, such as the mysterious demise of Edgar Allan Poe at age 40, days after he was found deliriously wandering the streets of Baltimore and wearing someone else’s shabby clothes. Playwright, actor and writer Jim Bernhard delves into these deaths and more than 100 others, paying homage to some of literature’s largest lions and chronicling an array of attitudes toward mortality — from fear to bold irreverence.

What drew you to this topic?
I’m an actor, and a few years ago I was doing a play called “Underneath the Lintel” in which I had this speech: “Do you know how Aeschylus died, that towering playwright of ancient Greece? Apparently eagles pick up turtles and carry them aloft until they find a suitable rock to drop them on, to crack them open. One day, an eagle thought Aeschylus’ bald head was a rock. Exit Aeschylus.” That got me thinking about whether other authors have died in interesting ways. Indeed there were some unusual causes of death, such as the toothpick in a martini that killed Sherwood Anderson, or Molière’s fatal attack while playing a hypochondriac in one of his own plays or Tennessee Williams’ choking on a bottle cap.

The book spans centuries of literary history, from ancient Greece to the modern era. When was the worst time to be an author, in terms of staying alive?
It would seem that, ironically, authors in the classical age lived longer than modern authors do, even though the longevity of the general population is much greater today. Sophocles died at 91, Euripides in his late 70s and Plato at 81. The average age of the classical writers in my book at the time of their death was about 70, compared to 65 for those in the 20th and 21st centuries. Reasons for this may be the stress of modern life and the excessive reliance of many writers on alcohol, tobacco and drugs. Of course, there are exceptions, like the nonsmoking, vegetarian teetotaler George Bernard Shaw, who died in 1950 at the age of 94.

What’s the most surprising thing you learned while researching these authors and their deaths?
I think most of us feel a bit as William Saroyan did when he said, “Everybody has got to die, but I always thought an exception would be made in my case.” Although we don’t like to recognize our own mortality, the big surprise is the realization that death actually is inevitable and universal.

What do you think really happened to Poe?
No medical records survive, and his obituaries blamed “congestion of the brain” or “cerebral inflammation.” Medical experts have attributed Poe’s death to a range of causes, including delirium tremens, epilepsy, diabetes, rabies, mercury poisoning, suicide and assault. One of the most convincing theories is that Poe was grabbed by political thugs, drugged and used to cast illegal votes at multiple polling places before he was beaten and left to die.

Do you have a favorite anecdote from the collection?
One of the most bizarre is the story that circulated at the time of Thomas Hardy’s death. He had wished to be buried in Dorset, where he was born, but his executor thought he should be interred in Westminster Abbey’s Poets’ Corner. As a compromise, Hardy’s heart was removed, to be buried in Dorset, and the rest of his remains were to be cremated and buried in the Abbey. According to the story, Hardy’s heart was stored in a biscuit tin in the garden overnight, where the family cat found the heart and ate it. When the undertaker realized what had happened, he killed the cat and buried it in Hardy’s grave. The Hardy estate heartily denied this story!

What can we learn about an author — or anyone — from the way he or she died?
I think you can learn much more from what authors wrote about their expectations of death than the manner in which they actually died. Just one example is Mark Twain’s irreverent bravado. “I do not fear death,” he wrote. “I had been dead for billions and billions of years before I was born, and had not suffered the slightest inconvenience from it.”

Which author did you think had the best attitude toward his or her mortality?
I like to quote Marcus Aurelius, who wrote, “Despise not death, but welcome it, for nature wills it, like all else. Death smiles at us all; all we can do is smile back.” 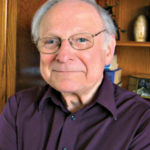 This interview appeared in the Spring 2016 issue of Rice Magazine.