In the first two years after desegregation, four African-American students — the best and brightest of their high schools — joined Rice’s undergraduate student body. Their impact on Rice was enormous; what was Rice’s impact on their lives? 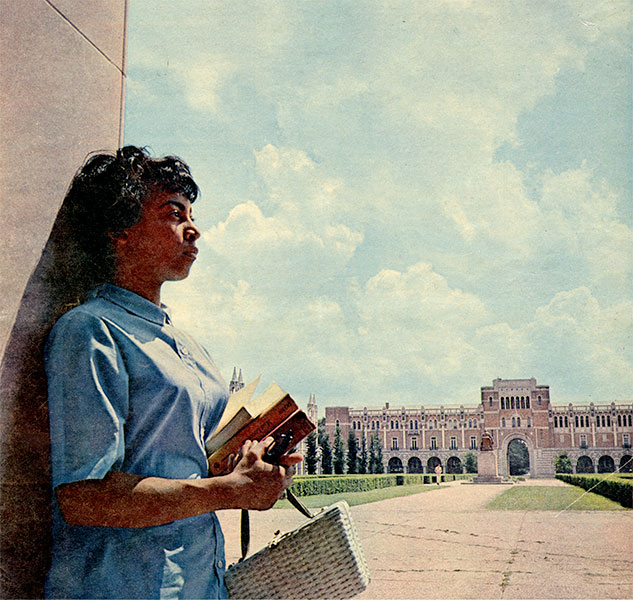 Jackie McCauley was an academic star — the first black student in Texas to be named a National Merit Scholar — and some of the country’s most prestigious colleges were recruiting her. Rice was initially her third choice, after Harvard and MIT, but that changed when she read in the newspaper that a group of Rice alumni were trying to stop the university from integrating.

“Rice irritated me for doing that,” McCauley said in a recent phone interview from her home in Canberra, Australia. So she put Rice at the top of her list. “If I hadn’t gone to Rice, I would be aiding and abetting what I consider to be an immoral act. To walk away would be letting them get away with something that was no longer acceptable and had never been acceptable.”

When she walked through the Sallyport for the first time, McCauley said that being one of two blacks on campus with 2,500 students did not faze her. (Charles Freeman was the other black undergraduate, who also had been admitted in 1965.) Her father had been in the Army for many years and had been stationed at various military bases, where she had attended schools that were predominately white.

At Rice, she said, everyone made a special effort to make her feel at home. “They wanted to make sure that I felt like every other student,” she said. “They were courteous; they were kind.” The president of the university invited her to his office for a chat. As a member of Jones College, McCauley attended a mixer at one of the men’s colleges at which the college president and vice president each asked her for a dance. She was also invited to join MENSA and the Young Republicans, but declined both offers, joining the Young Democrats instead. “There was nothing that I can remember unpleasant ever directed at me,” she said.

Barney McCoy ’67 was a junior when McCauley entered Rice, and he often saw the freshman at the student center, where he worked. “She was a bright and vivacious lady with a great sense of humor, which could be sometimes biting,” he said. “She was the kind of person who participated in theater. She had that kind of outgoing attitude.”

McCauley, in fact, joined the Rice Players. She had parts in three plays, including the lead role in “The Perils of Pomona,” a play about a Native American woman who is forbidden to marry a white man.

Acting was a passing interest for McCauley, who was constantly seeking new challenges. From an early age, McCauley was a curious, diligent student. Her curiosity was sparked by her parents, Willie and Harriet, who read to her every day when she was a young child and later bought her a set of encyclopedias. Her father was a sergeant and moved the family every year to a different Army base. Born in Fort Benning, Ga., McCauley attended grade schools in Texas and California and high school in Germany. She graduated from Kashmere Gardens High School in northeast Houston.

Her sister, Marganette McCauley Williams, a Houston resident, said that McCauley was so focused on going to college that nothing would stop her from taking the entrance exam. “On the day she took the SAT, she had a temperature and her tonsils were swollen,” Williams said. “My mother worked for a doctor, and right after the SAT, Jackie’s tonsils were removed.”

The summer before starting at Rice, McCauley had an internship at NASA, where she did research for the Apollo program. At Rice, her intention was to major in a science, but the social upheaval of the ’60s fascinated her so much that she switched to social sciences.

“This was the period when the country was going up in flames,” she said. “It was ‘burn, baby burn.’ When I made the move to sociology and psychology, I thought it was something meaningful.” She took several liberal arts courses, one of which was an introductory course in United States history, taught by Ira Gruber.

Gruber, who now is the Harris Masterson Jr. Professor Emeritus of History, kept meticulous notes of his students and remembers that McCauley was in the same class as Scott Wise ’71 and Ed Emmett ’71. “She was a good student who did well on examinations and, although somewhat shy, took a constructive part in discussions,” he said.

By the end of her first year, McCauley was married and helping with her husband’s work with Volunteers in Service to America. In part because of her community involvement, McCauley’s grades suffered, and she was put on academic probation. She returned for her sophomore year, but dropped out after the fall semester.

“I was more of an activist, working with my husband with VISTA, which is like [a domestic] Peace Corps,” she said. “It wasn’t any failings of Rice that led me to leave. I was exploring other aspects of life. It didn’t fail me; it’s just that I moved on.”

In the 1970s, McCauley became a program director with KLOL, at that time one of Houston’s most popular radio stations. She then moved to KSAN, a radio station in San Francisco, and then to Australia, where she had a radio show called “Shootin’ the Breeze,” which was syndicated in 80 American cities. McCauley has remained in Australia since 1980. She operates a small business that sells books to government offices and schools, and she also works in holistic healing, treating people who suffer from chronic pain by using therapeutic massage, energy and Pilates. Now 69, she has one daughter, Elana, who lives in Sydney.

As McCauley looks back at what she did 50 years ago at Rice, she acknowledges that she helped open the doors to black students.

“No one should be self-marginalized, which is what I would have been doing if I hadn’t applied. You just do what you know is right in your heart,” she said. “If what I did means that a number of other students could go to a university that previously had been unavailable to them, then sure, that is my legacy.”