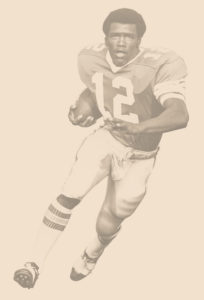 Stahlé Vincent ’72 was among the first African-Americans to play football at Rice and the first black quarterback in the Southwest Conference. Despite his many accomplishments as a student–athlete, he was ready to quit in his junior year after injuring his arm.

But then he started receiving a barrage of congratulatory letters from teachers, athletes and administrators from around the state. He was especially touched by one from an athlete who praised him for making it “cool to be a good student and a good athlete.”

That letter convinced Vincent to stay at Rice. “I realized it was not just about me,” he said. And thanks to that letter, Vincent now encourages his fellow alumni to extend a hand to current athletes. “It’s hard to be a student at Rice, and it’s doubly hard to be a student–athlete.”

Vincent spoke April 1 at a dinner in honor of 15 black alumni who were among the first to compete in a sport at Rice. The event was part of a yearlong celebration, “Celebrating 50 Years of Black Undergraduate Life at Rice,” organized by the President’s Office, the Association of Rice University Black Alumni (ARUBA), the Office of Alumni Relations, Rice Athletics and the Office of Public Affairs.

In addition to Vincent, the honorees were as follows:

Rodrigo Barnes ’73, the first African-American to be named to the All-Southwest Conference defensive team and who was later drafted by the Dallas Cowboys.

Willis Wilson ’82, the first African-American head coach at Rice. As the basketball coach from 1992 to 2008, he led his team to an appearance in the National Invitation Tournament and was named District 9 Coach of the Year.

Joseph Callier ’77, head of the “R” Association when the Hubert E. Bray Scholar–Athlete Award was created to honor the male and female athletes with the top grade point average.

Denise Bostick ’80, who played volleyball and was known as an outstanding hitter.

Goya Qualls ’82, the first player on the women’s basketball team to receive a full scholarship. She was team captain, an MVP and a record-setting rebounder.

Wanna Hadnott ’84, who lettered all four years as a member of the women’s tennis team and served as the team’s co-captain. She reached top-20 status in the country in 1983.

Don Freeman ’89, who attended Rice on a tennis scholarship.

Merritt Robinson ’90, a three-year letterman in football and baseball.

Raffi Belizaire ’05, a forward on the varsity soccer team in her sophomore year. She also threw the shot put and hammer for the women’s track and field team.

Lauren Lewis ’13, who joined the women’s swim team as a walk-on and competed in the 100-yard breaststroke, the 200-yard breaststroke and the 50-yard freestyle. She was on the C-USA Commissioner’s Academic Honor Roll for three consecutive years.