For the first time in Rice history, the Rice Bands have their own space to call home. Most recently housed in the Rice stadium weight room, the new band hall provides a permanent home for all of the Rice bands, including the Rice symphonic band, the jazz ensemble, the jazz combo and, perhaps most especially, the Marching Owl Band (MOB).

The hall’s grand opening took place March 31, with dedication speeches by Chuck Throckmorton, director of bands, John Hutchinson, dean of undergraduates and Jake Spisak, current MOB drum major. Optimism dominated the three speeches as the speakers looked forward to the exciting new opportunities that the dedicated space will allow. “The MOB is a place where we get to meet extraordinary people and make extraordinary friendships,” Spisak said, adding that the homey feel of the band hall will surely bolster the camaraderie. 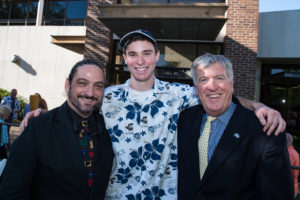 Throckmorton, Spisak and Hutchinson outside the band hall

Currently, the MOB varies in size from 40 to 100 musicians, both undergraduate students and alumni, depending on the performance. The MOB has rehearsals three times a week during football season and also plays at basketball games and various campus and citywide events. The symphonic band, made up of 20 musicians, may be taken for course credit and rehearses once or twice a week. The two jazz bands may also be taken for course credit and rehearse on Sundays. The jazz ensemble has 22 musicians and the jazz combo has eight.

Of course, the opening of the band hall would not be complete without the MOB’s iconic rendition of 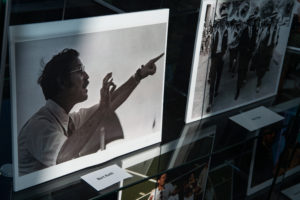 “Louie Louie.” Spisak presented Dean Hutchinson with the ceremonial cowbell and the dedication culminated with the MOB emerged from around a building to march the audience into the band hall. Inside the band hall, visitors listened to the concert bands while browsing vintage uniforms and other memorabilia. With the new band hall, the demand for “more cowbell” can be well met.