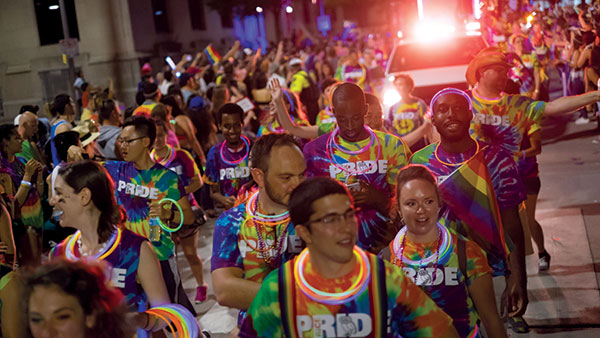 THE RICE COMMUNITY came out in force for the 2016 Houston Pride Parade June 25. It’s a partnership with a long history: Rice’s original LGBT organization, the Rice Gay/Lesbian Support Group, was formed in 1979, the same year as Houston’s first official Pride Parade. Since 2008, Rice Queers and Allies, Rice Alumni Pride and the Graduate Student Association have joined the Office of Public Affairs in co-sponsoring a float in the annual parade. This year, more than 80 students, staff, faculty and alumni walked, waved and tossed glow bracelets to an estimated crowd of 700,000 attendees. The back of Rice’s float featured a banner honoring those killed and injured in the Pulse nightclub shooting, just two weeks earlier. “We were very proud that the Rice community chose to stand in commitment to equality, dignity and the intrinsic worth of all,” said Greg Marshall, director of University Relations in the Office of Public Affairs.