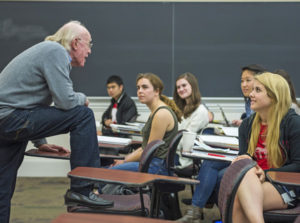 Dennis Huston holds forth in one of his legendary Shakespeare classes.

I really enjoyed reading Terrence Doody’s piece on Dennis Huston [“Exit, Stage Left,” Page 24]. During my four years at Rice, Prof. Huston (or “Dennis,” or “Doc” — he let us know that he didn’t care much as to what we called him) was my English literature professor (twice), my college master (all four years), my castmate in college theater productions (twice) my teammate on an intramural touch football team and my friend. One memory that stands out for me is of a cookout for students held in the back yard of Hanszen House. Several of us were gathered around Prof. Huston, discussing various topics, and he launched into a rumination on what the undergraduate experience should be — not a time, he said, to just prepare for a professional career; rather, an opportunity to discover and explore what really fires your passion. To borrow a phrase often used these days in our school’s fundraising letters, Dennis Huston will always be for me a huge part of what makes Rice, Rice. — Robert Catterall ’82 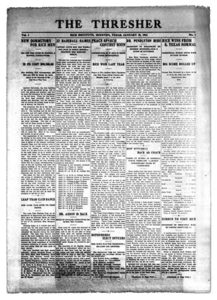 I read with interest the article “100 Years of the Thresher” (Page 36) and was disappointed to see no mention of Rice’s discovery of the hanging chad 33 years before Florida made it a household word. I refer to the attempt to computerize student government elections in 1967, reported in the Thresher with the headline “Election Today. Results? Next Week.” As the geek responsible for the fiasco, I learned that voters and computer punch cards don’t play well together. What seemed like a perfectly reasonable system for counting votes led to incompletely punched cards jamming the computer and resulted in a contested election resolved by the Intercollege Court. If only Florida election officials had had the foresight to read the Thresher, we might have been spared a disputed presidential election. — Charles P. Schade ’68

SELECTED READER SURVEY RESULTS
A random selection of Rice Magazine recipients are surveyed each quarter via email on their opinions and reactions to the magazine overall.

MOST-READ FEATURE
Exit, Stage Left: Dennis Huston Retires
“In my senior year, Prof. Huston allowed me into his Shakespeare class when I had not taken any English courses since my freshman year. I will always be grateful. He taught with such passion and energy; he deserved every honor he was accorded. I wish I had a fraction of his energy. It was so good to hear that it’s never flagged.” 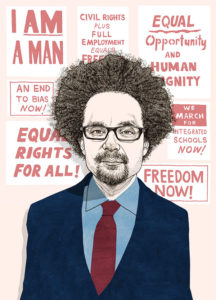 Have a comment, criticism or story idea? Write to us at ricemagazine@rice.edu.