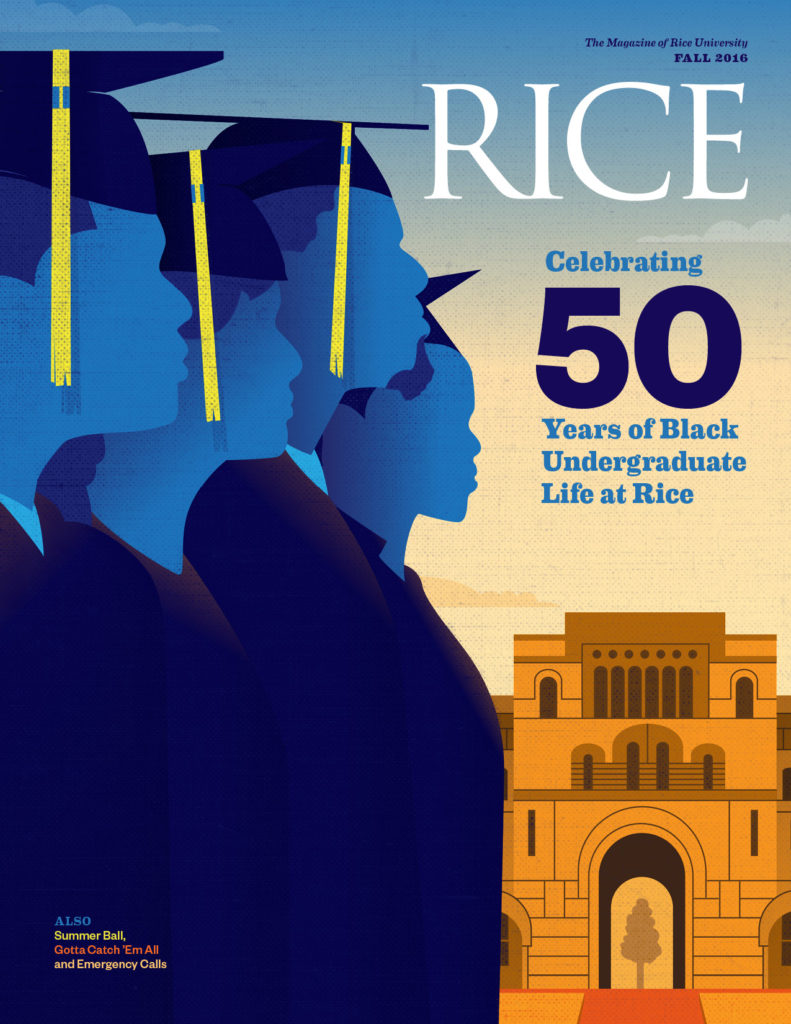 I found all of the [“Gifted and Black”] stories very interesting reading. They were well written and seemed to tell the full stories of the lives of real people, complete with the challenges and victories.It was a little sad to read of Charlie Freeman’s lifelong struggles to settle in and mostly sad to hear of his untimely passing.
— EARL RODD ’70

Most interesting issue yet! I entered Rice in September 1948, and things were very different then. Women weren’t really part of Rice at that time since we couldn’t live on campus and “A” House, across the street, was the only gathering place. I remember that the student body at that time thought segregation was not fair, and we petitioned to admit black students. We were told that [W.M.] Rice’s will prohibited it, end of story — until the board used racial inequality to break the will so that tuition could be charged.

We won’t go into the Math 100 professor who was responsible for me believing that I couldn’t do math until a great teacher at the UT Graduate School of Business showed me otherwise. After that, I taught remedial math for over 20 years at Austin Community College.

I had some great and not-so-great teachers at Rice. Among the greats were Professor Davies in biology, Professor Chandler in parasitology and Colis Lyle in German, who recommended after the German II final that I take Italian for my third-year language. We won’t go into the Math 100 professor who was responsible for me believing that I couldn’t do math until a great teacher at the UT Graduate School of Business showed me otherwise. After that, I taught remedial math for over 20 years at Austin Community College. Rice was a long time ago and most of my classmates are gone but I hope Rice will “every day in every way get better and better.”
— DORIS JANE BEASLEY MARTIN ’52

After reading President Leebron’s note, I felt honored to be connected to a university that demonstrates a willingness to recognize its complicity in past injustices while simultaneously embracing the challenges necessary to move closer to justice and equality for everyone. I share President Leebron’s hope that “the arc of the moral universe” that Martin Luther King Jr. and Theodore Parker made famous bends not only toward justice but also toward “a shared joy in the diversity of humanity.” This desire reminds me of one of my most formative experiences at Rice. After the U.S. Court of Appeals for the Fifth Circuit ruled that affirmative action in higher education was unconstitutional in 1996 (Hopwood v. Texas), a decision that subsequent U.S. Supreme Court decisions invalidated, I joined with classmates and faculty to discuss how the university would respond to this ruling. All of us in attendance cherished diversity and recognized the importance of thoughtful affirmative action programs.

I am delighted to see that Rice continues to take a leading role in welcoming diversity in its students, faculty, educational opportunities and public pronouncements. The decision to publish “Gifted and Black: A Half-Century of Black Undergraduate Life at Rice” as the cover story of the Fall 2016magazine accords perfectly with that effort.
— DAVID GROSSMAN ’97

Thanks for the issue on black students at Rice. As I graduated in 1969, I remember this era quite well. Like [Rice President] Pitzer, I would not have gone to Rice had it not integrated. I was from Port Arthur, like Charlie Freeman, but did not meet him until we attended Rice, as Port Arthur was segregated.

I remember well the TSU riots. The Houston Chronicle depicted the student dorms trashed by the police and reported that dorm mothers had watches ripped off their wrists and stomped. It was basically a police riot on a black campus; Charlie and I agreed on that. At that time, the police were paid poorly, and many were poor farm boys from East Texas with KKK leanings. Sadly, Charlie is no longer around to comment. He was a very interesting guy, and I’m glad to have known him.
— RICHARD HENCKE ’69